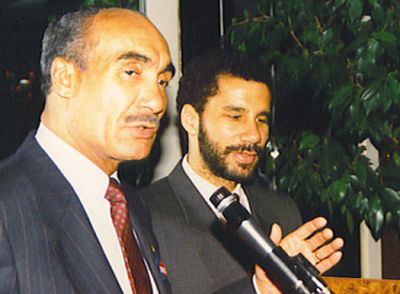 Basil Alexander Paterson, attorney, politician, and educator, was born on April 27, 1926 in Harlem, New York to parents of West Indian descent, Evangeline Alicia and Leonard James Paterson. Paterson attended New York City public schools and in 1942, at the age of 16, he graduated from De Witt Clinton High School in the Bronx. He then enrolled in St. John’s University in Queens but left school during World War II to serve two years in the army. After the war Paterson returned to St. John’s where he earned a B.S. in biology in 1948. He then enrolled in St. John’s Law School, receiving his Juris Doctor in 1951.

In 1965 Paterson was elected to the New York State Senate where he represented the Upper West Side of New York City and Harlem. In 1970 he stepped down from his Senate seat to run for Lieutenant Governor of New York with gubernatorial running mate Arthur Goldberg. Goldberg and Paterson lost to the Republican incumbent Governor Nelson Rockefeller and Lt. Governor Malcolm Wilson.

In 1978, Mayor Ed Koch appointed Paterson Deputy Mayor of New York City. The following year he resigned to run for Secretary of State of New York. He won the contest and became the first African American to serve in this position and second in the history of New York State to be elected to a statewide office. Paterson served as Secretary of State until 1982.

After 1982 Paterson enjoyed a career as a visiting professor at State University of New Paltz and Hunter College in New York City. He has also served as an adjunct professor at Fordham University School of Education. He was also a member of the law firm of Meyer, Suozzi, English & Klein, P.C., where he co-chaired the firm’s labor law division.

Paterson was the father of New York’s 55th Governor, David Paterson, the Lt. Governor who was elevated to the post of governor upon Gov. Eliot Spitzer’s resignation on March 17, 2008, and Daniel Paterson, a New York state court administrator. Basil Alexander Paterson, a member of Sigma Pi Phi fraternity, died in New York City on April 16, 2014. He was 87.