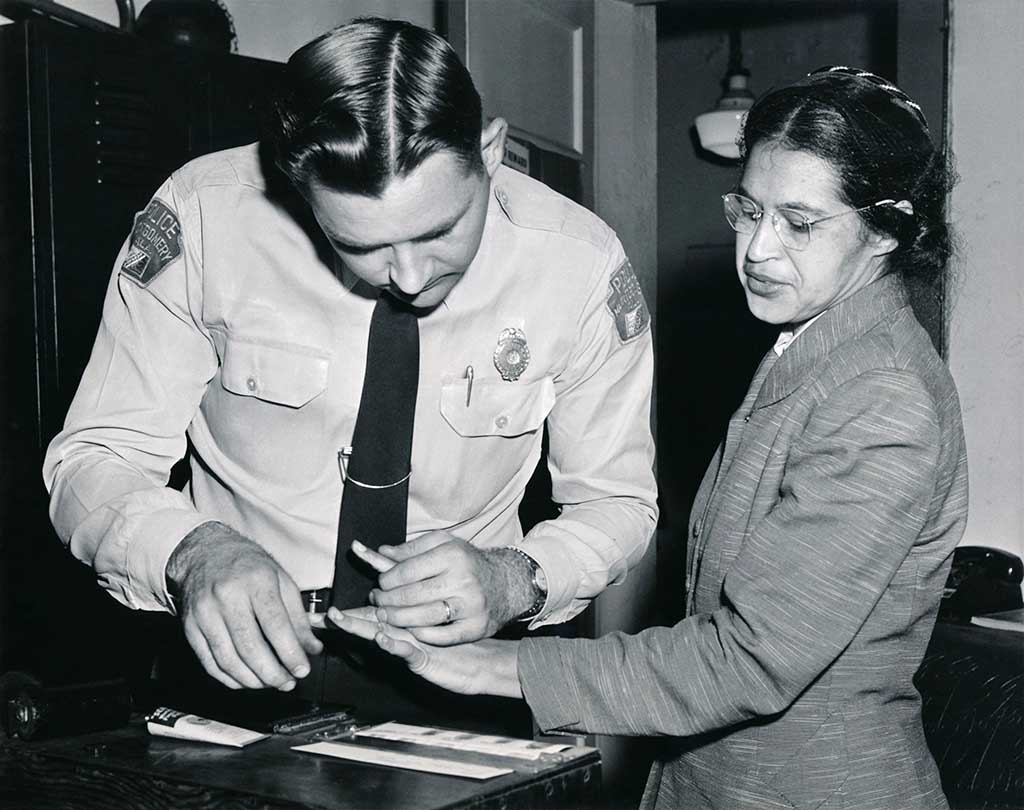 Revered as one of the most influential people of the twentieth century, Rosa Parks is best known for her role in the Montgomery Bus Boycott in 1956. Parks was born on February 4, 1913, to Leona and James McCauley in Tuskegee, Alabama. Leona worked as a teacher and James as a carpenter. Parks was schooled by her mother until the age of eleven when she moved to Montgomery with an aunt and started attending the Montgomery Industrial School for girls. She even took a job as a janitor to support her private school education. Though Parks began to attend Alabama State Teacher’s College High School, she dropped out to care for ill family members.

After marrying barber and local political activist Raymond Parks in 1931, she became an active member of Montgomery’s NAACP, where she served as youth director and later as the secretary. She also participated in the organization’s voter registration drives. Parks became an advocate of desegregation and took pride in being a member of the organization that won the Brown v. Board of Education case.

On December 1, 1955, following the end of her shift as a seamstress for the Montgomery Fair department store, Parks boarded the Cleveland Avenue city bus. As passengers boarded the bus, Parks and other African American riders were asked to give up their seats once the “whites only” section had filled. Parks refused. Like other advocates of desegregation, Parks placed herself in danger by refusing to follow Montgomery’s segregation laws. She was arrested and received a $14 fine. This was Parks’s second encounter with the bus driver James Blake (he had kicked Parks off a bus many years prior to this incident).

Parks called local NAACP president E.D. Nixon, and informed him of her arrest. Within hours, the Women’s Political Council (WPC)—which was formed in 1946 to address the grievances of black bus patrons in Montgomery—sprang into action. The WPC printed flyers and brochures, phoned potential supporters, and created carpools, marking the beginning of the 381-day Montgomery Bus Boycott. After a long protest, the US Supreme Court declared bus segregation unconstitutional in 1957.

Following the boycott, Parks moved to Detroit, Michigan with her husband and worked as a seamstress before taking a job as an assistant to Detroit Congressman John Conyers. In 1987, she founded the Rosa and Raymond Parks Institute for Self-Development, which teaches students about the Civil Rights Movement and encourages them to strive for success.

Parks received numerous honors, including over 40 honorary degrees, the Medal of Freedom, the Congressional Gold Medal of Honor, and two NAACP image awards. The state of Michigan honors Parks each February 4 on Rosa Parks Day. Troy State University in Alabama honored Parks by constructing a museum and library that bears her name. The Henry Ford Museum in Michigan also preserved Parks’ legacy by purchasing the Cleveland Avenue bus she rode on December 1, 1955. In addition to authoring several books about her story, in 2002, Parks teamed up with CBS to produce a biographical film titled “The Rosa Parks Story.”

On October 5, 2005, Rosa Parks passed away in Detroit. She was 92 years old. Later that month she became one of only 30 Americans and the first woman to lie in honor in the Capitol Rotunda. In 2013, her statue was added to Statuary Hall in the same building. She was the first African American woman so honored.