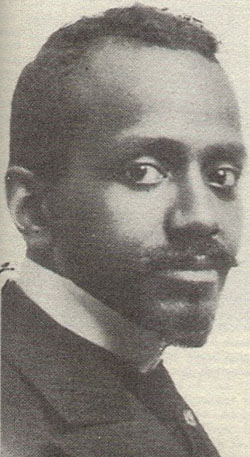 Accomplished journalist and activist Noah Thompson became one of the most influential leaders in Los Angeles, California during the early twentieth century. Born in Baltimore, Maryland on June 9, 1878, Thompson fled Baltimore as a young adult in search of success in the United States’ burgeoning urban centers. After rising to prominence in Los Angeles as a dedicated journalist and real estate investor, Thompson utilized his social, political, and economic gains to promote the improvement of black Angelenos.

Like many African Americans at the end of the nineteenth century, employment opportunities encouraged Thompson to migrate to Chicago, Illinois. While working in various industrial sectors, he took courses at Greg’s Business College. In 1909, Thompson accepted a position at Booker T. Washington’s Educational Institute and moved to Tuskegee, Alabama. After learning about the economic success of the emerging black community in Los Angeles, California, Thompson migrated to Los Angeles in 1911.

Taking advantage of the real estate opportunities in Los Angeles, Thompson invested in apartment complexes and office space. In addition, he developed a successful career as a journalist and wrote for the Evening Press, Morning Tribune of Los Angeles, Los Angeles Times, and the Liberator of Los Angeles. Most significantly, writing for local Race Papers, he urged blacks to flee Southern and Northern states for the economic opportunities awaiting them in Los Angeles. Thompson even advertised his apartment complexes and office spaces in the California Eagle to encourage black migration.

Dedicated to the development of a successful black Los Angeles, Thompson helped direct the Commercial Council of Los Angeles, where he and other prominent African Americans encouraged the development black enterprises. The organization even offered monetary support to black entrepreneurs migrating to Los Angeles. Seeking to bring the ideologies of black progress Westward, Thompson abandoned Marcus Garvey’s UNIA and set up the Pacific Coast Negro Improvement Association (PCNIA) to support blacks in the West.

Thompson’s prominence in Los Angeles was propelled through his involvement in local and international politics. Over his lifetime, Thompson served with the Chamber of Commerce, was elected as a Four-Minute Man, served on the Soldier’s and Sailors’ Welfare Commission of L.A., and the National Colored Soldiers’ Comfort Committee. Additionally, his community service led local government officials to endorse Thompson for a position as U.S. Minister to Liberia. Although the date of his death is unclear, it is evident that Thompson dedicated much of his life to Los Angeles’ African American community.