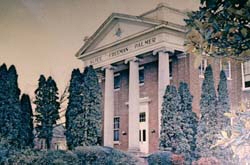 In 1902, Charlotte Brown Hawkins opened an institute for African American teenagers in North Carolina. She established the institute in a converted blacksmith shop and named it for her mentor, Alice Freeman Palmer.  Hawkins credited Palmer, the first woman president of Wellesley College, with much of her early education.  Palmer helped Hawkins financially so she could attend the Salem State Normal School, where she prepared to become a teacher.

Over the years the Palmer Institute expanded to include 350 acres of campus and a farm to produce food for the students and teachers.  The Alice Freeman Palmer Building, completed in 1922 as the first all-brick structure on the campus, included administrative offices, classrooms, the Wellesley Auditorium and a library which held reproductions of the world’s great works of art.

In its early years the school’s curriculum followed that of Booker T. Washington’s Tuskegee Institute, an agricultural and manual training facility. However, over Hawkins’s 50-year teaching career, it shifted from its technical focus and increasingly emphasized academic and cultural education. The school became a nationally accredited preparatory school by the Southern Association of College Secondary Schools before its closure in 1971.  During its 70 year history the Palmer Institute educated more than 1,000 African American students.

In 1971, after the Institute was destroyed by a fire, nearby Bennett College purchased the property.  The campus was subsequently controlled by a variety of owners until 1987 when the State of North Carolina created the Charlotte Brown Hawkins Museum. The museum, established to recognize the contributions Hawkins had made in African American education, became North Carolina’s first African American state historic site. Today the museum features exhibits, tours of historic structures and audiovisual presentations.