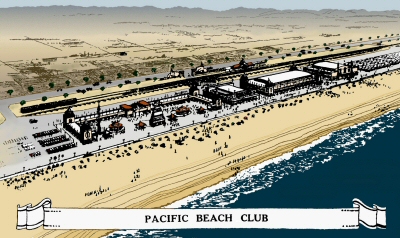 Pacific Beach Club illustration based on advertising art in the California Eagle
Illustration by Chris Jepsen, Fair use image

Touted by the California Eagle as the “greatest undertaking ever put upon our people in America,” the Pacific Beach Club was to be the largest all-black recreational resort in the United States. Built on the shores of Huntington Beach, California between 1925 and 1926 (30 miles south of Los Angeles in Orange County), the facility was designed for Los Angeles’s growing black middle class. Although a local white attorney initially bankrolled the project, local African American leaders such as E. Burton Ceruti and Joe Bass spearheaded the effort. The club’s proprietors sought land outside of Los Angeles County due to Jim Crow racial restrictions on all but a few hundred feet of the County’s 75 miles of beachfront.

The proprietors secured seven acres and commenced building a bathhouse for 1,500 people, a ballroom and pavilion and club house for 2,000, a restaurant, grocery store, drug store, and a 200-unit tent city (equipped with water, electricity, and gas) in the spring of 1925. According to the advertisements, there was “no finer group of cottages at any beaches,” white or black, in the nation. The bathhouse and pavilion were completed in January, 1926.

Problems plagued the endeavor from the beginning. Contractors frequently abandoned the project while white business interests in Huntington Beach obstructed efforts of the club’s proprietors to obtain permits, water, and electricity. Finally, two weeks before the Pacific Beach Club’s grand opening, arsonists burned it to the ground. No arrests were ever made.