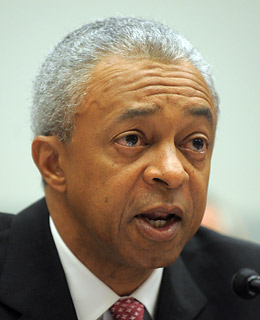 Born into poverty, the grandson of a former slave, business executive Stanley O’Neal rose through the ranks of corporate America to become the first African American to head a major firm on Wall Street when Merrill Lynch named him chief executive officer in 2002.  In 2002 Fortune magazine also named O’Neal the “Most Powerful Black Executive in America.”  Just five years later, however, on October 30, 2007, O’Neal announced that he was stepping down from Merrill Lynch when it was revealed that the company had suffered an $8 billion loss as a result of risky investments in subprime mortgages.

Earnest Stanley O’Neal was born on October 7, 1951, the eldest child of Earnest O’Neal, a farmer, and Ann Scales, a domestic.  Although the family lived in Wedowee, Alabama, population 750, O’Neal was born in nearby Roanoke because Wedowee’s only hospital refused to admit African Americans.  O’Neal spent the first years of his life surrounded by extended family on his grandfather’s farm, and when not attending school in Wedowee’s one-room schoolhouse, O’Neal could be found picking cotton and corn in his grandfather’s fields.  The enterprising O’Neal also sold and delivered newspapers.

In 1963 the O’Neal family fortunes improved when Stanley’s father found work on the assembly line at the General Motors (GM) factory in Doraville, Georgia.  The family’s move to a federal housing project in nearby Atlanta, Georgia enabled Stanley to attend the newly integrated West Fulton High School, where he proved himself a top student.  Following high school graduation, GM offered young Stan O’Neal a spot at its General Motors Institute (later Kettering University) where O’Neal combined the study of engineering and industrial administration with work at the Doraville plant.  The first person in his family to earn a college degree, O’Neal received his B.S. in Industrial Administration in 1974, graduating in the top 20% of his class.  O’Neal then went on to earn an MBA from Harvard Business School in 1978, thanks to a GM scholarship.

MBA in hand, O’Neal left Boston for New York City in 1978 where a job with GM as a treasurer’s analyst awaited him.  At GM, O’Neal quickly ascended the corporate ladder, becoming director of the treasury office in just two years.  He also met his future wife, Nancy Garvey, an economist, while at GM.  The couple married in 1983 and in 1991 Nancy gave birth to twins: a son and a daughter.  After nine years with GM, including two years as treasurer of their Spanish subsidiary in Madrid, O’Neal made the decision to leave the company for a position with financial giant Merrill Lynch in their corporate finance division.  By 1998 O’Neal had moved into management at Merrill Lynch, first as chief financial officer (1998), then president of the U.S. private client group (2000), president and chief operating officer (2001), chief executive officer (2002), and finally chairman in 2003.

In 2002 O’Neal was also named by New York mayor Michael Bloomberg to oversee the redevelopment of New York City following the destruction of September 11, 2001.  In addition, O’Neal continued his involvement with GM serving on the board of directors until 2006.  Following his resignation from Merrill Lynch, O’Neal is currently retired.