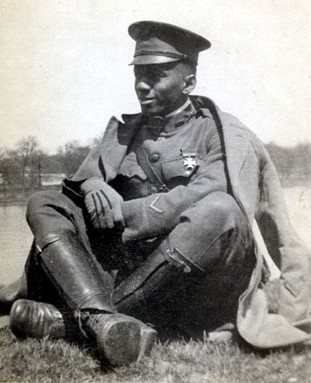 Aviation company founder William J. Powell was born in Kentucky on July 27, 1897. His family soon moved to Chicago, Illinois where he attended school. In 1914 at the age of 17 Powell was accepted into the University of Illinois engineering program. His studies were put on a temporary hiatus when World War I broke out, and Powell left school to serve in the racially segregated 370th Illinois Infantry Regiment as a lieutenant.

After surviving a poison gas attack while in serving in France, Powell moved back to Illinois to finish his degree and to recuperate from the damage done to his health. Although he did complete his degree, his health was never the same, and the gas attack most likely contributed to his early death.

William Powell was fascinated by flight and the idea of becoming a pilot so he began to apply to flight schools in the area. He was rejected by all area flight schools and the Army Air Corps because of his race, but he persevered and in 1928 was accepted at the Los Angeles School of Flight in California. In four years, he was licensed not only as a pilot but also as a navigator and an aeronautical engineer. He soon gained prominence in the Los Angeles aviation community.

In 1929, during a Los Angeles visit of Illinois Congressman Oscar DePriest, the only African American in the U.S. House of Representatives, Powell and fellow pilot Herbert Banning flew a single engine plane above the parade caravan. They named their plane the Oscar DePriest in honor of the city’s distinguished visitor. The next day, Susan Hancock, the mother-in-law of Booker T. Washington, and an investor in Bessie Coleman Aero, officially christened the Oscar DePriest. Powell then took Congressman DePriest for a flight over Los Angeles. The congressman, noting that this was the first occasion he had been in a plane piloted by an African American, endorsed Bessie Coleman Aero and urged local people to invest in the company.

Bessie Coleman Aero collapsed during the first years of the Great Depression. In 1934 Powell created a second firm he called Black Wings. He also published a journal dedicated to aviation in the Black community titled Craftsman Aero News and wrote a book titled Black Wings, a semi-biographical account of how he came to become a pilot.

This second effort, like Bessie Coleman Aero, did not survive the Great Depression.  William J. Powell died in Los Angeles in 1942 at the age of 45.