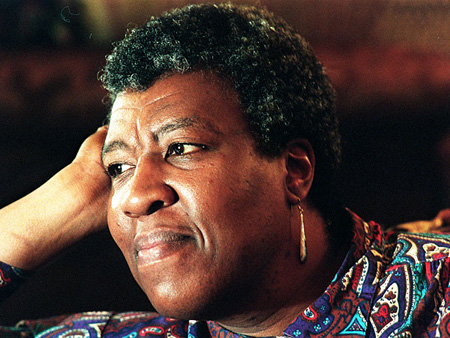 Octavia was born in Pasadena California to Laurice and Octavia Butler.  Her father passed away when she was a baby, so she was raised by her grandmother and her mother.  As a girl, she was known as Junie, derived from “Junior” since her mother was also named Octavia.  Butler’s mother worked as a maid to provide for the family after her father died, but nonetheless they continued to struggle in a poor but racially mixed neighborhood throughout her childhood.

Junie grew up shy, losing herself in books despite having dyslexia. Octavia Senior could not afford books, but she brought home the discards of the white families for whom she worked.  Butler began writing when she was 10 years old and told friends she embraced science fiction after seeing a B-movie called “Devil Girl from Mars” and thought, “I can write a better story than that.”

Ms. Butler earned an associate’s degree from Pasadena City College in 1968, and later studied at California State University, Los Angeles. Over the next few years, she religiously got up each day at 2 a.m. to write.  Within the next couple of years, her first novel, Patternmaster, was published by Doubleday in 1976. It became the first installment in Butler’s highly regarded Patternist series, whose later titles included Mind of My Mind (1977), Survivor (1978), Wild Seed (1980), and Clay’s Ark (1984). In 1979 she published Kindred, a novel that uses time travel to explore slavery in the United States.  Kindred became the most popular of all her books, with 250,000 copies currently in print.  Among Ms. Butler’s other books are the Xenogenesis trilogy, published by Warner Books, comprising Dawn (1987), Adulthood Rites (1988), and Imago (1989).

Butler moved to Seattle, Washington in 1999, and in 2006 she died suddenly after a fall outside her home in Lake Forest Park, Washington.