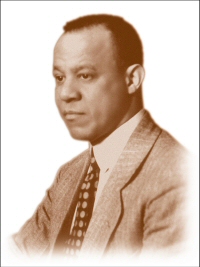 Dr. Lawrence Aaron Nixon was born in Marshall, Texas and graduated from Wiley College (l902) and Meharry Medical College (l906). He began his medical practice in Cameron, Texas but moved to El Paso in l909. In l9l0, he was joined in El Paso by his first wife Esther (nee Calvin) and their infant son. While practicing as a physician in El Paso, Dr. Nixon became a founder, organizer and member of Myrtle Avenue Methodist Church as well as a charter member of the El Paso branch of the National Association for the Advancement of Colored People (NAACP). A registered Democrat, Dr. Nixon challenged a 1923 state law that barred African Americans from participating in that party’s electoral primaries.

A devoted husband and father, humanitarian, and avid lover of classical music and baseball, Dr. Nixon endeared himself to El Pasoans through his professional and civic activities, providing in many times pro bono medical care. In l955, Dr. Nixon was admitted to the previously all white Texas State Medical Association and the El Paso County Medical Society. He retired in El Paso in l963 and three years later succumbed to injuries sustained in a car accident. He was survived by his second wife and four children.