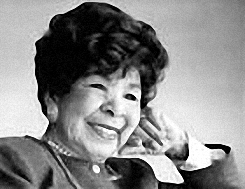 In choosing librarianship over teaching or social work, Effie Lee Morris combined her desire to help people with a personal passion for education.  In doing so she became one of America’s leading advocates for services to children, minorities, and the visually-impaired.  Born in Richmond, Virginia on April 20, 1921, Morris spent her youth in Cleveland, Ohio.  She received her Bachelor of Arts degree in 1945, Bachelor of Library Science in 1946, and Master’s in Library Science in 1956 all from Western Reserve University (now Case Western Reserve University).

Morris began work in 1946 at the Cleveland Public Library and established the first Negro History Week celebration for children there.  In 1955, she moved to New York as a children’s branch librarian in the Bronx.  Three years later, in 1958, she pioneered the development of library services for blind children.  She later served as president of the National Braille Club from 1961 to 1963.

In 1963, Morris joined the San Francisco Public Library (SFPL) as its first children’s services coordinator.  A year later, she created the library’s Effie Lee Morris Historical and Research Collection for out-of-print children’s books, featuring titles that depict the changing portrayals of ethnic and minority groups during the 20th Century.  She remained at SFPL for 15 years and then served as editor of children’s books at Harcourt Brace Jovanovich from 1978 to 1979.

Active in the American Library Association (ALA) since 1949, Morris chaired the Social Responsibilities Round Table and was an early supporter and chairman of the Coretta Scott King Award in Children’s Literature.  From 1971 to 1972 she was the first African American President of the Public Library Association.  In 2008, Morris was elected to honorary membership in the American Library Association, the organization’s highest honor, given to a living member of the Association who has made significant contributions to the field on librarianship. Morris was given the honorary membership “in recognition for her vision, advocacy and legacy to children’s services in public libraries.”  Effie Lee Morris died at her home in San Francisco in 2009.