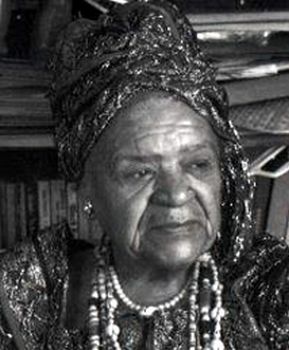 Audley “Queen Mother” Moore, prominent Harlem civil rights activist, was born on July 27 1898, in New Iberia, Louisiana to Ella and St. Cry Moore.  Moore’s parents passed away before she completed primary school.  Following their deaths, she dropped out of school to earn a living as a hairdresser to support her two younger sisters.   She educated herself by reading the writings of Frederick Douglass and listening to the speeches of Marcus Garvey.

Moved by the Black Nationalist message in a speech Marcus Garvey gave in New Orleans, Moore migrated to Harlem, New York in 1922 during the early years of the Harlem Renaissance. While in Harlem, she became a member and then a leader within Garvey’s Universal Negro Improvement Association (UNIA).  A proud shareholder in the Black Star Line, she helped organize UNIA conventions in New York.  Moore married Frank Warner in 1922.  They had one son, Thomas.

After the demise of the UNIA, Moore founded several organizations.  With her base in Harlem, Moore founded and served as president of the Universal Association of Ethiopian Women  in 1950.   In 1963, she founded the Committee for Reparations for Descendants of U.S. Slaves, and The Republic of New Africa, which demanded self-determination, land, and reparations for African Americans. During the height of the Cold War, Moore presented a petition to the United Nations in 1957 which demanded land and billions in reparations for people of African descent and it requested direct support for African Americans who sought to immigrate to Africa.

Moore also focused on local issues.  In 1966, she participated a sit-in at a Board of Education meeting in Brooklyn in 1966.   Moore and the other protesters said board members failed to adequately fund  schools in African-American communities.  She also served as the bishop of the Apostolic Orthodox Church of Judea and she co-founded the Commission to Eliminate Racism, Council of Churches of Greater New York.

While attending the funeral of former Ghanaian President Kwame Nkrumah in 1972, the Ashanti ethnic group bestowed upon her honorary title “Queen Mother.” In 1989, the Corcoran Gallery of Art, in Washington, D.C. honored Moore and 40 other famous black women in Brian Lanker’s photo exhibit, “I Dream a World.”

Moore’s activism continued through the mid-1990s, and she made her final public appearance at the Million Man March in 1995.  On May 2, 1997, Queen Mother Moore passed away at the age of 98 from natural causes in a Brooklyn nursing home.  At the time of her death she was survived by her son, five grandchildren and a great-grandson.