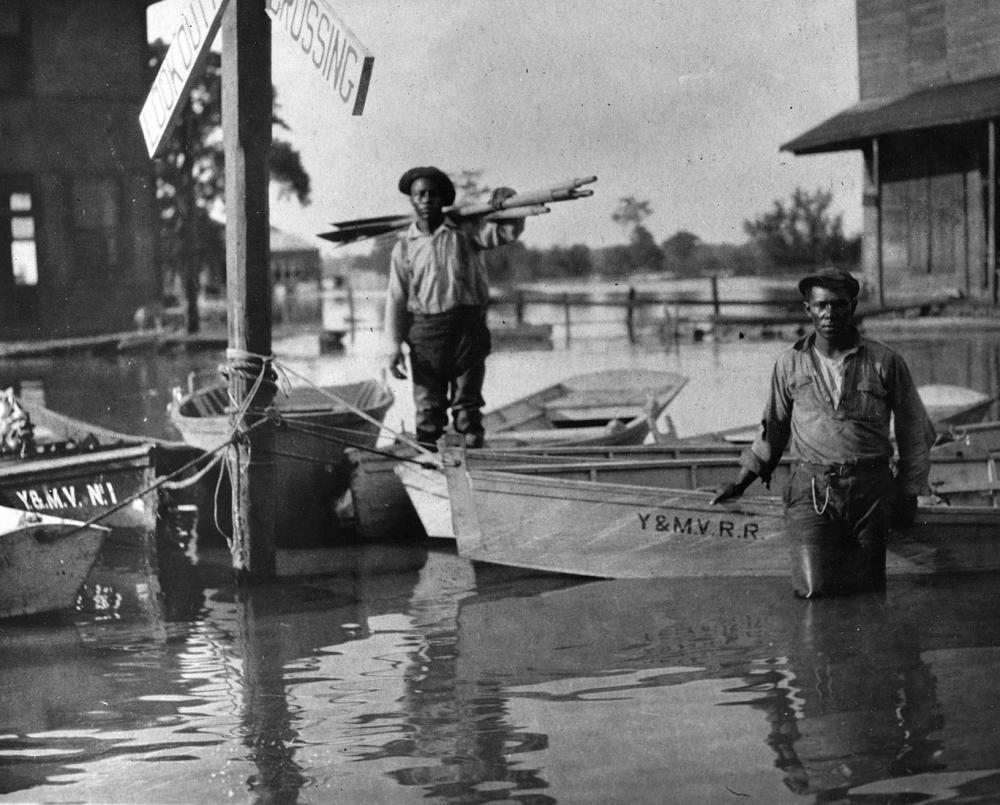 The Mississippi River “Great Flood of 1927” inundated large areas in Mississippi, Arkansas, and Louisiana. However, it was in Mississippi where the embankments overflowed, drowning hundreds, perhaps a thousand people, and became one of the largest natural disasters in US history in terms of loss of life.

The flood also starkly revealed the wide “delta of Black peonage” or the “new” slavery that controlled the lives of slaves freed in 1865 and their descendants sixty-two years after passage of the Thirteenth Amendment. The flood showed that the shadow of the plantation still loomed large, as little had changed in the Mississippi Delta since emancipation. Most blacks in the region still resided on plantations as sharecroppers and tenant farmers while many others were forced into coerced labor. In fact, in the aftermath of the flood, local law-enforcement authorities arrested thousands of black men, caged them in “pens,” and released them to white planters in need of rebuilding their businesses. The US Justice Department failed to aggressively pursue statutory violations of the Anti-Peonage Act of 1867, interceding reluctantly and sporadically in the region.

The Justice Department’s seeming indifference mirrored that of other federal agencies to blacks, who suffered disproportionately because of the flood. Walter White, executive director of the National Association for the Advancement of Colored People (NAACP) returned to Association headquarters in New York City, New York from the Mississippi Delta and wrote a scorching review of the failure of federal Jim Crow relief efforts in the flood areas. White revealed the use of federal troops in holding black “peons” in “concentration camps” until their planter employers could claim them.

This report and other confirming newspaper accounts prompted Secretary of Commerce Herbert Hoover, who was in charge of relief, to appoint a “Colored Advisory Committee” to investigate the NAACP’s complaints. Hoover’s committee was chaired by Tuskegee Institute president Robert Russa Moton, with eleven other Tuskegeeans as committee members. Hoover hoped that a benign report from the conservative Washington camp would discredit the harsh criticism from the NAACP. Attempting to play both sides against the middle, Moton urged Hoover to use this “grave natural disaster “to create “a sense of freedom and hope” for blacks in the Delta. Refusing to support White’s earlier findings, Moton hoped that this noncritical approach would influence Hoover’s relief efforts in a positive manner. However, Moton’s committee’s report lay dormant on Hoover’s desk for months.

Between January and March 1928, The Crisis (NAACP’s official magazine) ran a series of exposes on the despair, starvation, and exploitation of black labor in the delta. These essays revealed to a national readership that peonage (debt-slavery) bolstered by the Southern convict-lease system still dominated the lives of the vast majority of African Americans in the region.