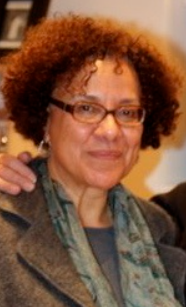 Miriam Esther Jiménez Román, professor, editor, archivist, curator, social theorist, author, and activist was born on June 11, 1951 in the coastal city of Aguadilla, Puerto Rico to Arcelia Román Ruiz (1931-2009) of Vega Baja and Afro-Puerto Rican Baldomero Jiménez Font (1928-1999) of Piedras Blancas. The family briefly lived in San Sebastián, near the historic town of Lares, before migrating in 1952 to East Harlem where her sisters Carmen, Evelyn and Awilda were born.

A 1968 summer Saxtons River Project participant, she studied with internationally recognized Black sculptor John Torres at Vermont Academy. Jiménez Román graduated from Manhattan’s High School for Art & Design where she published insightful short stories for Prism and majored in illustration and advertising art (1969). She attended the University of Vermont (1969-1971) and then transferred to Binghamton University to complete a sociology bachelor (1974) while spending a year at the University of Puerto Rico–Rio Piedras (1972-1973). She returned to Binghamton to complete the doctoral sociology coursework (1983-1987).

Jiménez Román moved to Puerto Rico in the late 1970s to cofound the feminist collective Encuentro de Mujeres and was Assistant Director of External Resources at InterAmerican University (1981-1983). She authored dozens of seminal works that challenged racial democracy, Taíno revivalism, blanqueamiento, and the US census, along with editing CENTRO: Journal of Puerto Rican Studies (1998-2001), the premier organ of the field. Her experiences as a Black Puerto Rican helped bring awareness of Afro-Latinidad and build coalitions with US Blacks. Influenced by the Civil Rights, Black Power, and Nuyorican movements, Jiménez Román asserted, “African Americans have always been in the vanguard. Everything that’s worthwhile in this country has come about because African Americans have pushed it. We all benefit every day, white people as well as people of color, from the struggles of African Americans.”

As a Research Coordinator and Curator of Exhibits and Special Programs at the Schomburg Center for Research in Black Culture, Jiménez Román worked with SNCC activist Roberta ‘Bobbi’ Yancy, Zita C. Nunes, and director Howard Dodson to produce widely celebrated international Africana exhibits (1987-1997). She was also Assistant Director of the Schomburg Scholars-in-Residence program (2001-2004) and a Scholar-in-Residence herself (2010-2011). In 2005, Jiménez Román co-founded and was executive director of the [email protected] Project, later the [email protected] Forum (2007), which held two instrumental international conferences, [email protected] Now!, that assembled artists, academics, and activists (2011, 2014).