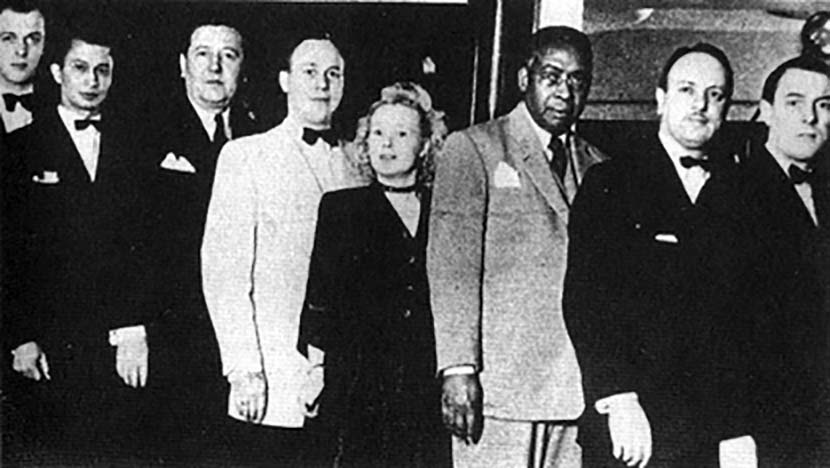 Civil rights activist Osceola Enoch (“Mac”) McKaine was born in Sumter, South Carolina on December 17, 1892. In 1908, at the age of 16, he moved to Boston, Massachusetts where he attended classes at Boston College.  Later he worked as associate editor of the Cambridge Advocate, a small black newspaper in the neighboring city of Cambridge, Massachusetts.  During the 1912 presidential election, 20-year-old McKaine served as Secretary for the Colored Progressive League of New England.

In 1913, McKaine joined the all-black 24th Infantry Regiment and was sent to the Philippines and later to Mexico to assist in the capture of Francisco “Pancho” Villa.  After attending the Colored Officers School in Des Moines, Iowa, McKaine served in France from June 10, 1918 to March 28, 1919 with the newly formed 367th Infantry Regiment. In 1919, Lieutenant McKaine returned to the United States, settling in New York City, New York’s Harlem where he worked with African American veteran’s groups, notably the League for Democracy, and wrote for the socialist newspaper The Messenger, edited by A. Philip Randolph and Chandler Owen.

The violence of the Red Summer in 1919 persuaded McKaine to leave the United States for Europe. In the early 1920s, he settled in in Ghent, Belgium where he opened a jazz nightclub called “Mac’s Place.”  The nightclub (later expanded to include a hotel) thrived in Ghent and McKaine was one of a handful of black nightclub owners in Europe between the Wars.  During the nightclub’s heyday in the late 1930s, Mac’s Place employed more than 30 people in the cultural and entertainment heart of the Flemish capital city.

Mac’s Place continued successfully until World War II.  On May 10, 1940, the Nazis invaded Belgium and reached Ghent. Although Nazi racial ideology made McKaine a target for harassment and possible execution, Nazi soldiers “never molested or offended” him directly.

By early 1941, however, McKaine returned to the United States and settled in his native South Carolina.  He joined the South Carolina National Association for the Advancement of Colored People (NAACP) and together with other leaders fought for voting rights and equal pay for black teachers in the state.

In 1944, the Progressive Democratic Party (PDP), a group of white and black liberals who challenged the regular (segregationist) Democratic Party, nominated McKaine to run for the U.S. Senate from South Carolina.  He was the first African American nominated for that position in the state’s history.  McKaine lost the election but continued his work with the National Democratic Party where he was a fervent supporter of President Franklin Roosevelt’s New Deal. Through his 1944 race and more generally his work with the South Carolina NAACP, McKaine is credited with registering thousands of South Carolina African Americans who voted for the first time.

Osceola McKaine returned to Europe and died in Brussels, Belgium on November 17, 1955 exactly a month before his 63rd birthday.  He was buried in Sumter, South Carolina.