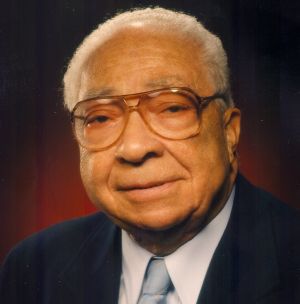 The first African American Postmaster of a major postal facility, Henry W. McGee, Sr. was born in Hillsboro, Texas, in 1910, and moved to Chicago, Illinois in 1927.  McGee was the first person to rise from the ranks of letter carriers to achieve the status of Postmaster, a post to which he was appointed by President Lyndon B. Johnson on November 5, 1966.  McGee had begun postal work in 1929 as a temporary substitute letter carrier, and became a regular postal clerk in 1937, advancing rapidly through a succession of Post Office jobs.

In 1931, McGee married Attye Belle Truesdale, the daughter of a church sexton from Little Rock, Arkansas.  After Attye Belle completed her college degree in 1944, McGee enrolled at the Illinois Institute of Technology (I.I.T.) and received his college degree in 1949. In a 1960s Chicago Tribune interview, McGee referred to his “sandwich education” as part of a long-term family love affair with education. In 1955, his son, Henry Jr., and older daughter, Sylvia, were in college, while younger daughter Penny attended grade school, and his wife returned to the University of Chicago for her Master’s Degree.  In 1959, McGee began his Master’s Degree while his son was finishing law school.  In 1968, while Penny was in college, McGee was awarded an Honorary Doctorate of Laws from I.I.T, his alma mater, where he had once been elected “married student of the year.”

He joined the Chicago Branch of the National Alliance of Postal Employees (NAPE) in 1937 where he quickly rose to leadership positions, and was elected President of the Chicago branch.  The information McGee garnered from his work with the Alliance eventually became the basis for his thesis, “The Negro in the Post Office,” which he wrote for his Master’s Degree in Public Administration from the University of Chicago in June of 1961.  Later McGee served as President of the University Of Chicago Board Of Visitors.

McGee also became active in work with the Chicago Branch of the National Association for the Advancement of Colored People (NAACP) and in 1946 was elected President.  At 36 he was the youngest person ever chosen to lead the Branch, and the first person in that position from a working class background.  Under his presidency, the Chicago NAACP opened its doors to organized labor.  McGee was a member of Kappa Alpha Psi and Sigma Pi Phi fraternities.

Upon his retirement in from the Post Office in 1973, Mayor Richard Daley appointed McGee to the Chicago Board of Education. He also served as President of the Hyde Park-Kenwood Community Conference and for seventeen years as President of the Joint Negro Appeal, an organization dedicated to serving underprivileged African American youth.  From 1978 to 1993, the McGees spent retirement winters in Tuscon, Arizona, but Henry McGee was a resident of Chicago for all his adult life, and he passed away there on March 18, 2000.