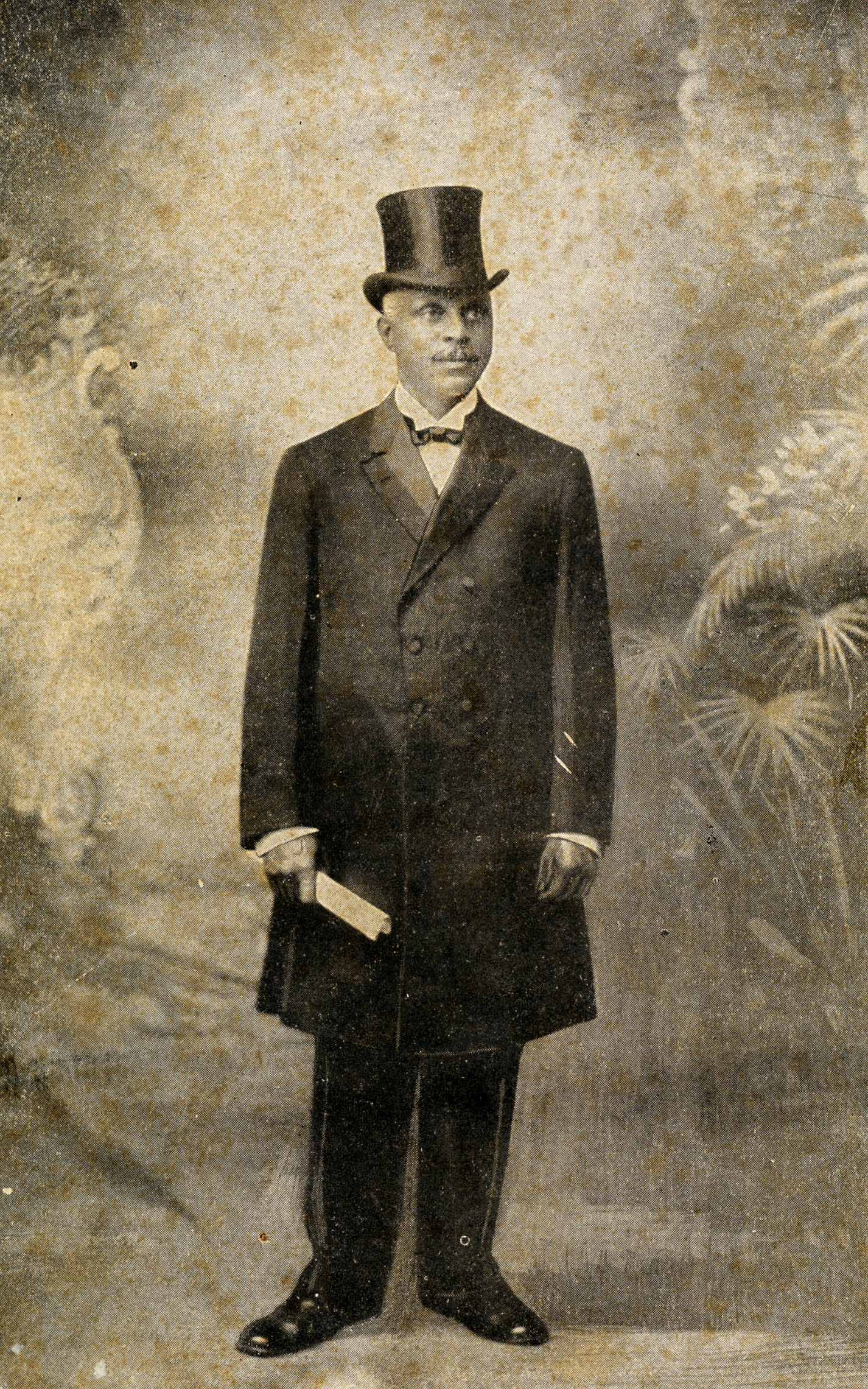 In the article below Bruce Mouser, professor emeritus at the University of Wisconsin, La Crosse, discusses his new book, For Labor, Race, and Liberty: George Edwin Taylor, His Historic Run for the White House, and the Making of Independent Black Politics which describes his efforts to chronicle the life of the first African American to run for the Presidency of the United States.

In 1968, I accepted a position at the University of Wisconsin in La Crosse. I was the new historian of Africa and some of my colleagues thought it reasonable to expect that I would teach African American history as well. That didn’t happen but they persistently provided me information about La Crosse’s early black settlers that they had discovered in their own research. Yet I also knew that writing about a local topic, which some in my department equated with local history or antiquarianism, would not help my chances for promotion.   I collected evidence nonetheless and eventually an outline, at least as it related to the La Crosse region, began to take form.  I started to think that local black history could be reconstructed.  By the 1980s, promotion was no longer a concern, but the problem of finding a venue for publication remained.

That situation changed in mid 2008 when it seemed that a black person might actually become the presidential candidate of a major party. That event surprised me as much as the fall of the Berlin Wall, the collapse of the Soviet Union, or the end of Apartheid in South Africa.  But I also was surprised for another reason. In the course of my study of black La Crosse, I had come upon the story of George Edwin Taylor, a local newspaper owner and editor, graduate of Wayland University, leader in the Wisconsin Union Labor Party, and in 1904 candidate for president of the United States.  Most remarkable, Taylor was African American.  I had followed Taylor’s career in La Crosse, but once he left Wisconsin for Iowa, I abandoned my research on him.  The topic still intrigued me and Barack Obama’s election as president in 2008 tipped the scale in favor of a return to my elusive subject from La Crosse.

Born in Arkansas in 1857, George Edwin Taylor and his single mother left that state for Illinois just before the Civil War’s outbreak. Taylor’s mother died in 1861 or 1862, leaving him with no known sponsor or relative. He survived (a miracle in itself) and arrived at La Crosse, Wisconsin, in 1865, onboard a side-paddle wheeler. Local authorities viewed this “streetwise” eight-year old orphan as potentially troublesome, and a La Crosse court fostered him to Nathan Smith, a black farmer until he reached the age of 20. Taylor’ placement with Smith, however connected him with a politically savvy farmer who insisted that his young ward obtain a superior education. He sent Taylor to Wayland University where the young man learned the skills of oratory and debate.

After completing his higher education, Taylor rose rapidly in the Wisconsin Labor Movement and became involved in local and state government.  By 1886, he owned and edited The Wisconsin Labor Advocate, a La Crosse newspaper with an overwhelmingly white readership.  In it Taylor revealed an uncanny command of language and an ability to know when to lead and when to follow.

Taylor interested me for many reasons, but perhaps most intriguing was a near void of information about his time in Iowa before his run for the presidency. There were no diaries or journals, no articles or publications; and the newspaper he edited in Iowa did not survive. Writers of black America mentioned him only occasionally, but always as an unknown who just happened to have run for president in 1904. There were no personal photographs. He had no children, so there were no blood relatives to consult.  I knew nothing about his life in Iowa and very little about his 1904 election campaign. Of course, neither did anyone else. I had no notion of where his story might lead me, but I knew that apparently many had judged his experience and ability as extraordinary, otherwise how could he have become the candidate of a political party for the office of president? That question alone drove me forward, if only to satisfy my curiosity as to how it was possible for historians to have so easily passed him by.

Luckily my friends who work in libraries were eager to share their knowledge of new resources being added almost daily in their discipline. Databases are opening vast storehouses of information as never before. Census records exist online through programs that increasingly are available in a nearby public library or on one’s basement computer. NewspaperArchive.com, however, supplied the key to data regarding Taylor’s activities in Iowa. That database assembled past editions of newspapers from more than 200 Iowan communities. Additionally, the company has digitalized and organized nearly 6,000 newspapers nationwide into a single searchable database.

For a time I thought I understood Taylor’s Wisconsin years as a rare story of a late 19th Century black political activist in the labor movement.  With the Iowa information I now realized that Taylor was unique for his time and place. He had shared the stage–literally–with Frederick Douglass, Booker T. Washington, and W. E. B. Du Bois and was a business partner with George Woodson, founder of the National Bar Association.  He knew Buffalo Bill Cody personally and had worked for “Brick” Marcus Pomeroy, editor of the National Democrat. He associated with journalistic greats such as T. Thomas Fortune and Calvin Chase. Yet, both his name and his story were missing from the history books.

I asked a colleague to suggest a title for my manuscript on Taylor,  He gave me the one which now graces the book’s cover: For Labor, Race, and Liberty. His suggested title captured the essence of Taylor’s life. George Edwin Taylor began his political career in the labor movement in Wisconsin where he played a prominent role at a time when African Americans seldom ventured outside the black political community and when most labor leaders were indifferent at best and often hostile to black workers.  Nonetheless Taylor focused on the plight of the entire working class regardless of color. His use of populist, greenback, and labor language illustrated that, at least for a time through his prism, race was relatively unimportant.

Taylor’s views began to change in the mid-1880s when the country drifted away from the promises of Reconstruction.  Soon after he moved from Wisconsin to Iowa he turned to the Republicans but the GOP had by this point abandoned the South to conservative white Democrats and the remainder of their political program proved unfriendly to labor, populism, or civil rights. For Taylor, labor and populist issues remained foundational.  He asked his now mostly black listeners and readers to vote Democratic to protect their own political and economic interests as workers.  Despite the politics of Southern Democrats, he believed the national Democrats, who were pro-labor, were at least on the right track.

Yet Taylor would ultimately reject the Democrats as he had earlier abandoned the Republicans.  When the leaders of the National Liberty Party, an all-black third party, asked him in 1904 to become the standard-bearer, Taylor was at that moment perhaps the most influential black person in the National Democratic Party.  His tenure as president of the National Negro Democratic League (the party’s Negro Bureau) from 1900 to 1904, however, had been marked by internal strife and a steady decline in the ability of black voters to influence elections or of the National Democrats to pursue their votes.  By 1904, Taylor realized that, despite his best efforts, both parties increasingly were ignoring black issues, and that black Americans were losing personal and political rights at an accelerating rate. He wrote in 1904, “We are doomed.”

Taylor knew his run for the presidency was a futile, thoroughly symbolic gesture, and that it would likely bring him ridicule and end his political life.  It did both.  But Taylor also believed it to be “a duty to his race” to continue to fight for civil rights and economic opportunity for African Americans regardless of the outcome of the next presidential election.

Taylor’s story in For Labor, Race, and Liberty, tells us much about the emergence of independent black politics at the nineteenth century’s end, and of the conundrum of young activists who watched the erosion of rights won through struggle and who could not prevent the nation from sliding into the abyss of “Jim Crow” segregation.  But Taylor’s story also informs us of an uncomfortable and ultimately unsuccessful struggle by one journalist-politician to reconcile the interests of white labor and black civil rights.  Ironically Taylor’s work anticipated the emergence of the New Deal political coalition of the 1930s but he did not live to see the fruits of his own political labor.

Bruce Mouser, For Labor, Race, and Liberty: George Edwin Taylor, His
Historic Run for the White House, and the Making of Independent Black
Politics