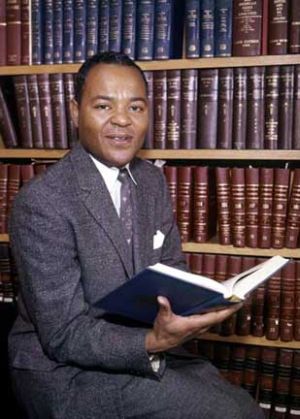 Wade Hampton McCree, Jr. was a noted American attorney, jurist, and law professor. Born to middle class parents in Des Moines, Iowa, his father, Wade Hampton McCree, Sr., was an alumnus of Fisk University and had a respected career as a pharmacist and later as United States Narcotics Inspector. His mother, Lucretia Harper McCree, was a graduate of Simmons College and became a teacher.

Due to McCree Sr.’s employment, the family lived in Honolulu, Hawaii, in Chicago, Illinois, and eventually in Boston, Massachusetts where McCree attended the prestigious Boston Latin School. McCree abandoned his plans to attend the University of Iowa when informed that he would not be allowed residence in the campus dormitories. He enrolled instead at Fisk University, following in the footsteps of his parent and older sister. He received his A.B. degree from Fisk University in 1941, excelling with a number of honors and responsible campus roles.

McCree joined the U.S. Army in World War II and fought in three of the Italian campaigns in World War II, as a member of the historic and segregated Buffalo Soldier Division. Rising to the rank of Captain in the U.S. Army, McCree eventually earned his LL.B (law) degree from Harvard in 1944 while still in the service. He received an honorable discharge in 1946.

McCree and his new wife Dores moved to Detroit, Michigan, where they eventually raised three children. After being unable to secure a position at any of Detroit’s prestigious law firms despite impressive academic success and a reference from the Dean of Harvard Law School, McCree in 1948 began his legal career in Michigan at Bledsoe and Taylor, a noted black law firm. He remained there until 1952.

His career in public service began by appointment as referee to the Worker’s Compensation Commission by Governor G. Mennen Williams, serving from 1952-54. He was also appointed as the first African American judge on the Circuit Court for Wayne County, Michigan, a post he held until 1961.

In 1961, President John F. Kennedy nominated McCree to serve as the first African American federal judge in the Eastern District of Michigan, and the third nationwide.  In 1966 President Lyndon B. Johnson nominated McCree to serve on the United States Court of Appeals for the Sixth Circuit. He was quickly confirmed shortly thereafter and served on the bench until 1977.

In 1977, President Jimmy Carter appointed McCree to the post of United States Solicitor General, making him the second African American, after Thurgood Marshall, to hold the position.  He resigned the post in 1981 to become a Professor of Law at the University of Michigan where he taught until his death of bone cancer and heart problems in 1987.

As Solicitor General, McCree served as the Chief Appellate Counsel to and advocate for the United States. He personally argued 25 cases before the Supreme Court, including arguing, as a friend of the court, the Regents of the University of California v. Bakke case, 438 U.S. 265 (1978), a noteworthy case on the role of race and affirmative action in medical school admissions policies. He was quoted as asserting that he was “in favor of special admissions programs, but people who outgrow them should not be dependent on them.”