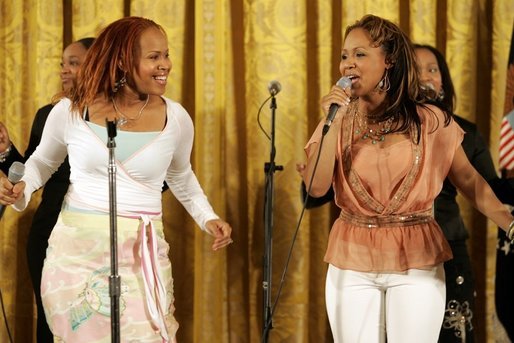 Sisters Erica and Tina Campbell of the singing group Mary Mary, perform for the President and First Lady Monday, June 6, 2005, during a celebration of Black Music in the White House. White House photo by Krisanne Johnson

Mary Mary has emerged as the most successful gospel duo of the 21st Century. In 1998, sisters and Erica Monique Atkins Campbell, born April 29, 1972, and Trecina Evette Atkins Campbell, born May 1, 1974, in Inglewood, California, formed the Urban/contemporary gospel duo “Mary Mary,” named after the two biblical women, the mother of Jesus and Mary Magdalene. The children of gospel singers, they began singing as youngsters in Church of God in Christ Choir in Inglewood.

In 2000, two years after forming their duo, they released their first album, Thankful, which soon became one of gospel music’s most successful albums, quickly selling more than one million copies. The album included the duo’s siblings, Thomasina Atkins, Alana Atkins, Delisa Atkins, and Shanta Atkins singing background and featured the hit single “Shackles (Praise You),” which was a crossover success becoming a Top 10 R&B song and a Top 40 Hot 100 hit on the Billboard charts. As a result, Mary Mary in 2001 received their first Grammy at the 43rd Annual Grammy Awards for “Best Contemporary Soul Gospel Album.”

Two years later in 2002, they released their second album, Incredible which peaked at no. 1 on the Billboard Top Gospel and became their second million-selling album. Their third self-titled album, Mary Mary, was released in 2005 and reached the Top 10 of the Billboard 200 album chart with sales of more than 500,000. Included in this album were the hit singles “Heaven,” “The Real Party,” and “Yesterday.”

The duo’s success continued through the decade.  In 2008 Mary Mary won the “Best Gospel Performance” at the 51st Annual Grammy Awards for the single “Get Up” from their album, The Sound which was also nominated for “Best Contemporary R&B Gospel Album.” The Sound, also a crossover sensation, peaked at no.7 on the Billboard 200 Album Chart, and became to that point their highest-charting album.

In 2011 the duo released Something Big which reached the top ten of the Billboard 200 Album Chart, marking the third time they had a crossover hit album. The single from that album, “Survive” reached no.12 on Billboard Adult R&B Airplay and remained there for 21 weeks. Another single from the album, “Sunday Morning” peaked at no. 15 and stayed charted for 20 weeks.

The 2013 album, Go Get It peaked at no.7 on the Billboard 200 Album Chart and remained charted for 29 weeks, marking their fourth hit album. That success garnered them two NAACP Image Awards for “Best Duo” and “Best Gospel Album.” More than any other gospel singers, Mary Mary has successfully infused urban hip-hop and R&B into contemporary gospel music.