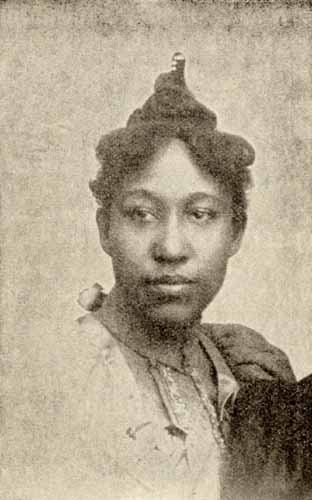 A pioneer in the world of African American music education, Harriet Gibbs Marshall was born in Victoria, British Columbia on February 18, 1868 to Mifflin Wistar Gibbs and Maria Ann (Alexander) Gibbs. In 1869 her family moved to Oberlin, Ohio. Marshall began her study of music at the age of nine and continued the pursuit at the Oberlin Conservatory of Music where she studied piano, pipe organ, and voice culture. Graduating in 1889, she was the first African American to complete the program and earn a Mus.B. degree, which at the time was Oberlin’s equivalent of a Bachelor of Music degree.

Marshall trained in Europe after graduating and in 1890 returned to the United States to found a music conservatory at the Eckstein-Norton University, an industrial school in Cane Springs, Kentucky. At the beginning of the 20th century, Marshall held the position of supervisor for the District of Columbia’s African American public schools, Divisions X-XIII, and served as the divisions’ director of music.

Harriet Gibbs married Napoleon Bonaparte Marshall, a Massachusetts lawyer, in 1906. Together they promoted her conservatory, but his career would eventually draw her away from her work in music education for years at a time. In 1922 she accompanied her husband to Haiti, where he was sent by President Warren G. Harding to be a part of the U.S. legation. They lived there for six years, during which time she founded the Jean Joseph Industrial School in Port-au-Prince and worked extensively with Haitian social welfare charities.

After Napoleon Marshall died in 1933, Harriet Marshall refocused her attention on the Washington Conservatory of Music and School of Expression. In 1937, as an expansion to the conservatory, she founded the National Negro Music Center as a resource to both promote creative work and to preserve traditional African American music. Marshall’s conservatory was a landmark in the history of black education. The Center sponsored regular concerts for the black community, trained many prominent musical professionals and attracted the nation’s most talented musicians as teachers. It remained in operation until 1960.