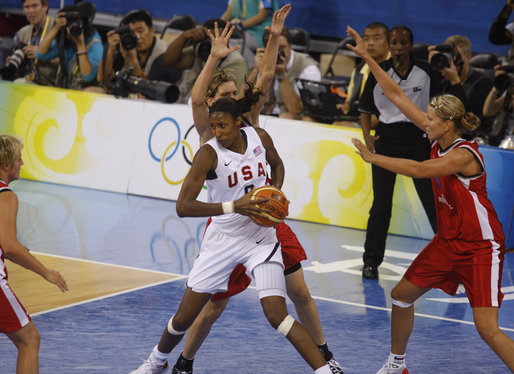 Lisa Deshaun Leslie is an American former professional basketball player who played for the Los Angeles Sparks in the Women’s Basketball Association (WNBA) for her twelve-year career from 1997 to 2009. She is a two-time WNBA champion, three-time WNBA MVP, and a four-time Olympic gold medal winner. Leslie was the first player to dunk in a WNBA game and was considered a pioneer and cornerstone of the league during her NBA career.

Lisa Leslie was born on July 7, 1972, in Gardena, California, to Christine Lauren Leslie and Walter Leslie, a semi-professional basketball player. Christine Leslie started her own trucking business to support her three children, after her husband left the family. Leslie has two sisters, Dionne and Tiffany, and a brother, Elgin. By the time Leslie was in middle school, she had grown to over 6′1″. In the eighth grade, she transferred to a junior high school without a girls’ basketball team and joined a boys’ basketball team. Leslie entered Morningside High School in Inglewood, California, in 1986 and while there led the girls’ basketball team to two state championships.

After high school, Leslie entered the University of Southern California (USC), where she played for the Trojans’ women’s basketball team from 1990 to 1994. During her time with the Trojans, she played 120 college games, averaging 20.1 points per game, making 53.4 percent of her shots, and 69.8 percent of her free throws. She set the PAC-10 Conference records for scoring, rebounding, and blocked shots accumulating 2,414 points, 1,214 boards, and 321 blocked shots. She also holds the USC single-season record for blocked shots (95). Leslie helped the team win one PAC-10 conference championship in 1994 and earn four NCAA tournament appearances. She was All-PAC 10 for four years and also earned All-American Honors. Leslie was also named national player of the year in 1994. She graduated from USC with a bachelor’s degree in communications in 1994.

In 2006, Leslie married Michael Lockwood. The couple has two children, Lauren Jolie Lockwood, born on June 15, 2007, and Michael Joseph Lockwood II, born on April 16, 2010.  In 2009, Leslie earned a Master’s of Business Administration (MBA) degree from the University of Phoenix in Arizona.