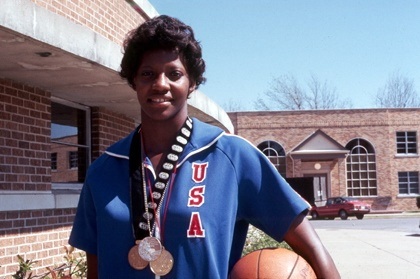 Lusia “Lucy” Harris, a former American basketball player, is considered to be one of the pioneers of women’s basketball. She played for Delta State University in Mississippi and won a silver medal with the U.S. Women’s Basketball Team in the 1976 Montreal Summer Olympic Games in Quebec, Canada. Harris was also the only woman ever drafted by the National Basketball Association (NBA). She has been inducted into the Naismith Memorial Basketball Hall of Fame and the Women’s Basketball Hall of Fame.

Lusia Harris was born in Minter City, Mississippi, on February 10, 1955, to Ethel and Willie Harris, a homemaker and vegetable farmer, respectively. She is the tenth of eleven children and fourth of five daughters. Harris and her siblings attended Amanda Elzy High School in Greenwood, Mississippi, where she played basketball. Harris won the most valuable player award three consecutive years, 1971 to 1973, served as team captain, and made the state All-Star team. She scored a school-record 46 points in one game and led her school to the state tournament in Jackson, Mississippi.

Delta State returned to the national tournament final in 1977, where she scored 23 points and 16 rebounds and led her team in its defeat of Louisiana State University 68-55, for their third consecutive title. Harris finished her college career with 2,981 points and 1,662 rebounds, averaging 25.9 points and 14.5 rebounds per game. Harris was also named as the tournament’s most valuable player (MVP) and to the All-American first team during Delta State’s three winning seasons. Harris graduated from Delta State University with a bachelor’s degree in health, physical education, and recreation in 1977. She also played on the United States Woman Basketball Teams where her team won gold in the 1975 Pan American Games and Silver in the 1976 Summer Olympic Games in Montreal, Canada.

Harris was chosen in the seventh round of the 1977 NBA draft by the New Orleans Jazz (Now Utah Jazz), becoming only the second woman ever drafted by an NBA team after Denise Long, who was selected by the San Francisco (California) Warriors in the 1969 NBA draft. However, the NBA voided the Warriors selection of Long, thus making Harris the first and so far only woman ever officially drafted. Harris declined to try out for the Jazz because she was pregnant at the time. She played professional basketball briefly in the 1979-80 season with the Houston (Texas) Angels of the Women’s Professional Basketball League (WBL).

After her basketball career ended, Harris returned to Delta State to earn her master’s degree in education in 1984. In 1992 Harris and former player, Nera White, became the first two women ever inducted into the Naismith Memorial Basketball Hall of Fame. Harris was the first African American woman inductee. Harris was also inducted into to the Woman’s Basketball Hall of Fame and the International Woman’s Sports Hall of Fame. Harris married George E. Stewart on February 4, 1977. The couple has four children, two sons and twin daughters.