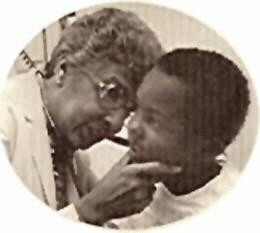 Dr. Blanche Sellers Lavizzo was the first African American woman pediatrician in the state of Washington.  She arrived in Seattle in 1956, with her husband Dr. Philip Lavizzo, a general surgeon.   They had left medical practices in New Orleans, Louisiana to pursue a better future in the Pacific Northwest.   She had been in a private practice in pediatrics in Seattle until 1970, when she became the first medical director of the Odessa Brown Children’s Clinic.  In this position she became the mainstay of health care for children in the Central Area and it was she who gave the clinic its motto, “Quality care with dignity.”

Born in Atlanta, Georgia, on July 11, 1925, she was a friend and schoolmate of Dr. Martin Luther King, Jr.  Her father was the owner of one of Atlanta’s largest black funeral homes.  She graduated from Spelman College in 1946, and from Meharry Medical College in 1950.  In 1975, she received a Masters in Public Health from the University of Washington.  In 1991, a 1,953 acre park– formerly known as the Yesler Atlantic Pedestrian Pathway, which led to the clinic– was renamed the Dr. Blanche Lavizzo Park and in 1995 a water play area for children in the Edwin T. Pratt Park was named in her honor.