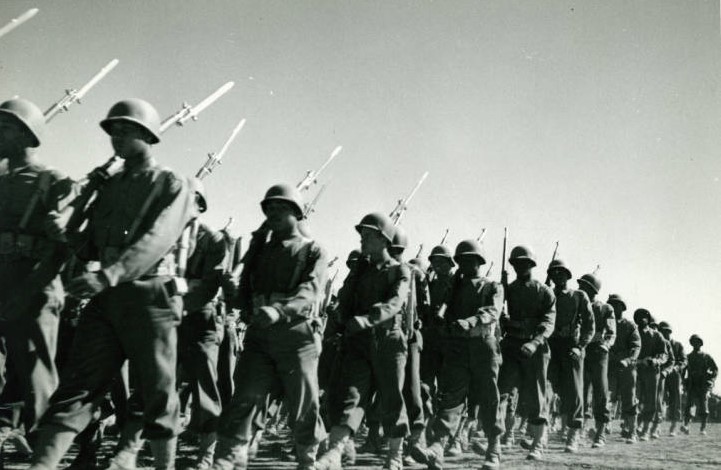 Before 1941 about 4,000 black soldiers (and a handful of African American officers) served in the 9th and 10th Cavalry Regiments (the “Buffalo Soldiers”), two of the all-black units formed after the Civil War.  Following the bombing of Pearl Harbor in 1941, the number of Black soldiers in the US military increased.  With the expansion of the Army during World War II, blacks were encouraged to enlist, and more black men began to receive commissions as officers.  In 1942, as the need for personnel continued to increase, the US Army activated the 93rd Infantry at Fort Huachuca, Arizona, the first all-black division formed during World War II.  Also in 1942, the Army combined the 9th and 10th Cavalry into the new 2nd Cavalry Division.  They were stationed at Fort Huachuca, alongside the 32nd and 33rd Women’s Auxiliary Corps (WAAC).

Nearly 1,400 structures at Fort Huachuca were built to house the segregated black male and female personnel.  There were upwards of 50,000 people posted at the base at this time, making it the third largest community in Arizona.  The base also hosted the Mountain View Black Officers Club, which has special meaning to black officers who spent their off-duty time there.  Built in 1942, the 17,000-square-foot club featured celebrities such as Lena Horne and Louis Armstrong.  In 2004 the Army targeted the building for demolition, but the Southwest Association of Buffalo Soldiers has been fighting to save the historic structure.