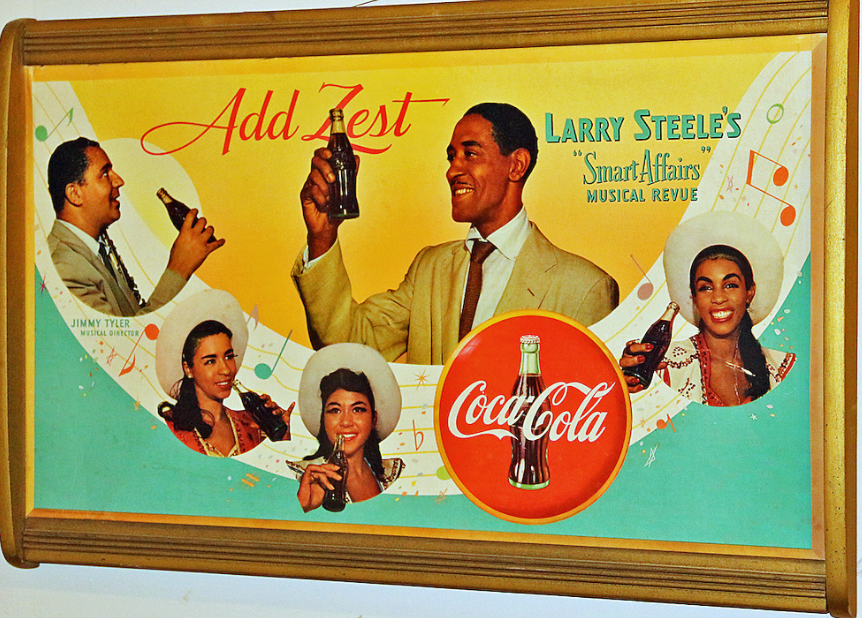 Larry Steele’s touring production review, Smart Affairs, was the largest black entertainment touring group in the United States from the 1940s through the early 1960s.  Steele’s review, headquartered in Atlantic City, New Jersey, featured up to 40 entertainment acts.  The revue performed in major venues throughout the United States and around the world. During that era his acts included Sammy Davis Jr., Cab Calloway, Sarah Vaughan, Billy Daniels, Freda Payne. and Lou Rawls. Smart Affairs performed regularly at the Apollo Theater in Harlem but also in venues such as San Juan, Puerto Rico’s Club Tropicoro, and the Majestic Theatre in Adelaide, Australia, the Barclay Hotel in Toronto, Canada, and the Dunes Hotel in Las Vegas, Nevada.

In addition, Steele created Beige Beauties and the Sepia Revue which spent the summer months entertaining tourists in segregated sections of Atlantic City such as the Chicken Bone Beach. Steele organized and managed the tours.  He was also a song writer and producer as well as the group’s secretary and bookkeeper. By the early 1960s Smart Affairs alone grossed between $400,000 and $500,000 annually and featured 40-50 performers working 40-45 hour weeks.

Smart Affairs broke the color barrier at Miami Beach, Florida’s Cotton Club in 1952.  After booking a show at this major Miami Beach nightclub, Steele learned that he and his revue were forced to stay in an African American hotel at least ten miles away from the Club. They were also required enter the club’s back doors and dine separately from white patrons. In response to the discriminatory policies, Steele invited famed entertainment columnist Walter Winchell to the show. Winchell, who was an outspoken supporter of civil rights for African Americans, wrote a glowing review of the revue’s performance and denounced the Miami Beach Cotton Club’s bigotry. In response to his article, audience members poured into the club from throughout the metropolitan Miami region to observe Steele’s Smart Affairs.  The resulting publicity forced the Cotton Club to change its policies regarding black entertainers and patrons.

Steele was an accidental entertainment impresario.  Born in 1913 and raised in Chicago, Illinois, his family wanted him to become an attorney.  Steele promised his father, a barber, he would study law at Northwestern University.  In 1934, however, 21-year-old Steele walked into the Panama Café, a South Side Chicago night club, and accepted a $3 a night job as a singing master of ceremonies and bandleader. Despite his youth, Steele already had experience as a replacement at the Regal Theater for regular MC, Jimmy White.

With nearly instant success Steele abandoned all thoughts of becoming a lawyer and dedicated himself to entertainment. He left Chicago for New York and helped organize and manage entertainers on the Chitlin’ Circuit, the group of black nightclubs stretching from the deep South to northern cities such as New York City, Detroit, Michigan, and Chicago.  By the mid-1940s Steele arrived in Atlantic City where he worked at Club Harlem, one of the leading entertainment venues on the East Coast at that time. By 1946, he opened his first Smart Affairs production at Club Harlem.

Headquartered at the famed club from 1946 to 1971, Steele’s Smart Affairs grew in stature in the show business world and attracted the attention of Frank Sinatra, Dean Martin, and Pearl Bailey, then one of the highest earning black performers of that period.  Steele managed his last show at the Club Harlem when he was 58.  He died nine years later in Chicago on June 19, 1980.