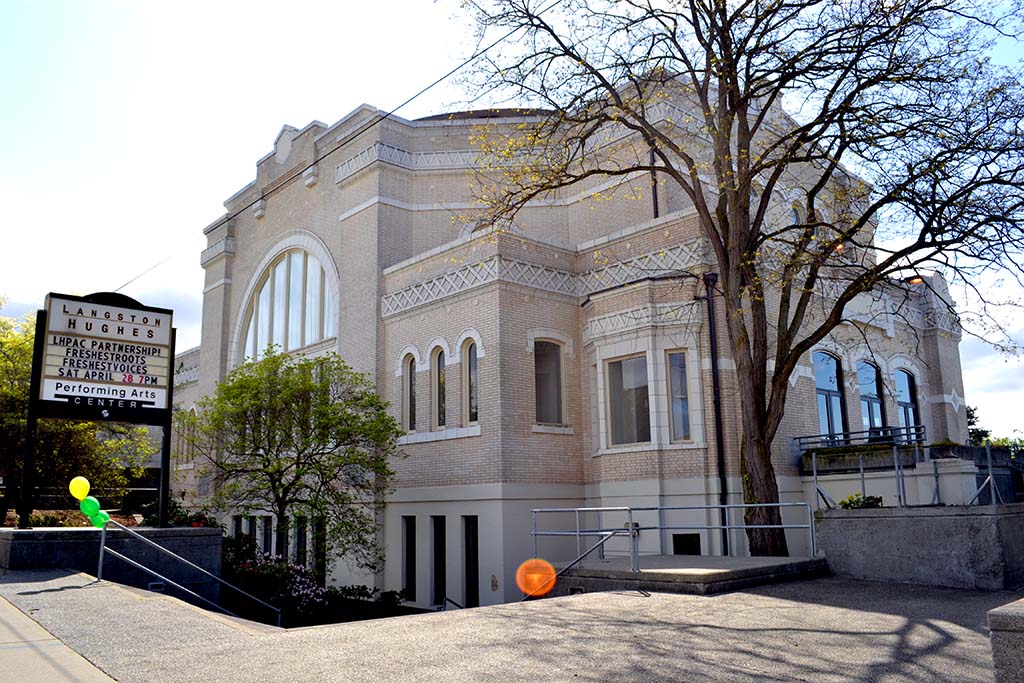 The Langston Hughes Performing Arts Institute (LHPAI) is Seattle’s longest-lived performing arts venue for programming primarily by and about people of African descent. It is located at 104 17th Avenue South in the Central Area, the traditional heart of the African American and Diaspora community.

Although the new city-funded center presented its own arts programming, and rented space to performing arts organizations, it was not classified as a performing arts venue. It was seen as “a recreation center that does not do basketball,” in the words of a center advisory council member. The Parks & Recreation Department administered it with other community centers, starting in 1972.

The center cultivated several local black performers and also attracted out-of-town arts professionals in the 1970s and 1980s. Moving into the late 80s and 1990s, the center added a subscription theater series, while continuing to provide classes such as the youth summer musical program. Recognizing this trend, in 2001 the Parks Department approved a reorganization plan, which included the name change to the “Langston Hughes Performing Arts Center” (LHPAC).

LHPAC also brought in its first artistic director, Jacqueline Moscou, who brought consistent artistic programming to the center beginning in 2002. In her tenure, she has established a wide spectrum of performing arts offerings in film, drama, dance, and literature. Among these was “Death of a Salesman” with an all-black cast in 2005. (This innovation was not repeated on a major scale until the 2009 Yale Repertory Theatre production, starring Charles Dutton.) She also brought to life the American premiere of the British play “Obama on My Mind.” The annual African American Film Festival, established in 2003, expanded from three to nine days in 2007.

However, like many other arts organizations, center staff found themselves making news in 2008 with internal disagreements over the center’s revamped mission. The debate was furthered by community anxiety that the center would drop its African American emphasis and neighborhood involvement. Royal Alley-Barnes, LHPAC’s executive director beginning in 2009, eased these concerns by increasing infrastructure resources and the center’s support of local artists and grassroots programming. The center adopted a dance company-in-residence and started an artist-in-residence program. During LHPAC’s 2010 seismic renovation and other systemic improvements, Alley-Barnes also guided LHPAC as it provided programming off-site until the renovation’s completion in 2012.

The center transferred from the Parks Department to the Office of Arts and Culture in 2013, and underwent another name change to become the “Langston Hughes Performing Arts Institute.” As of this year, the institute offers seasonal performing arts academies, professional theatrical productions, educational opportunities, and its own website.