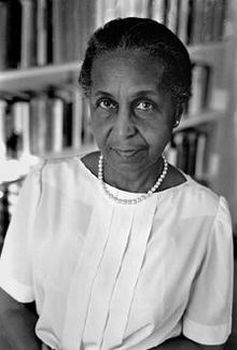 Eileen Southern was among the first generation of musicologists focused on studying, preserving, and teaching the history and traditions of African American music. She was also the first female African American faculty member at Harvard University.

Born Eileen Jackson in Minneapolis, Minnesota in 1920, her parents divorced when she was a child.  From that point on she was the caregiver for her younger sisters as they were shuttled between their mother’s home in Chicago, Illinois and their father’s home in Sioux Falls, South Dakota.  Her father purchased a grand piano for the three girls and they quickly learned to sing and play.  At age seven, Southern gave her first public piano concert.  Later in life, she would explain that as a girl she thought that everyone had a grand piano.

Southern received her education in Chicago’s public schools and then attended the University of Chicago where she earned a bachelor’s in music in 1940 and her master’s in 1941.  In 1961, she completed her Ph.D. at New York University where she studied with Renaissance music scholar Gustave Reese. Despite her achievements, racial and gender discrimination marked her career as she struggled to find faculty positions. In 1968, CUNY’s New York College eventually hired her and she helped the university meet the demands of the student body for a Black Studies program. In 1974, Harvard University hired her and she transformed the institution’s curriculum to reflect the contributions of African Americans to modern music.

Though trained as a classical pianist and having studied classical music and history for her Ph.D., her master’s thesis, The Use of Negro Folksong in Symphonic Form, was an indication of the shape her career would take.  While lobbying at Harvard for black music studies, a colleague remarked that the only African American music achievement was jazz.  Southern took this as a challenge and eventually compiled the first comprehensive study of African American musicians and composers, and the work they produced.  Her books include The Music of Black Americans: A History (1971), Bibliographical Dictionary of Afro-American and African Musicians (1982), African-American Traditions in Song, Sermon, Tale, and Dance, 1600s-1920: An Annotated Bibliography (with Josephine Wright) (1990), and Images: Iconography of Music in African American Culture (2000).

At the end of her career, Southern’s colleagues honored her with the title of Professor Emerita of Music and Afro-American Studies at Harvard University.  The title suggests the significance of her career and her role in remaking the intellectual tradition to include African American music.

She married Joseph Southern in 1942.  They had a daughter, April S. Reilly, and a son, Edward Southern.  At the time of her death, she had three grandchildren.