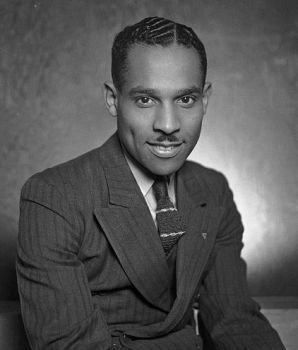 Charles H. “Teenie” Harris, a lifelong resident of Pittsburgh, Pennsylvania’s Hill District, was best known for his photographs taken during his four-decade long career at the Pittsburgh Courier.  Harris was born July 2, 1908 to Ella Mae and William Harris, the youngest of three brothers.  His family operated the Masio Hotel, a boarding house often filled with newcomers to the city during the first wave of black migration from the south to Pittsburgh that began in World War I.

Charles’s brother William “Woogie” Harris was a numbers runner in Pittsburgh. Woogie brought an income stream into the family and access to celebrity and nightlife culture prominently featured in many of Charles’s photographs.

Harris began working as a self-taught photographer in the early 1920s. Despite his lack of formal training he became well known for his precise eye for composition and character.  In 1937 he started selling weekly news photos to Flash! magazine.  The following year he opened a photo studio where he took advertising photographs, and portraits, leading to a lengthy roster of celebrity photos including Duke Ellington, Satchel Paige, Jackie Robinson, Cab Calloway, Marian Anderson, Ella Fitzgerald, Ethel Waters, Josephine Baker, and a personal friend, Lena Horne.

Harris joined the widely circulated Pittsburgh Courier in 1939 as a freelance photographer, and in 1941 he was hired as a staff photographer. Harris worked for the Courier throughout the 1940s when it had become the nation’s largest circulation black weekly partly by its promotion of the Double V Campaign.

The Courier required Harris to pay for his own materials and film development which led to a reputation for frugality in his work.  The Mayor of Pittsburgh, David L. Lawrence, famously referred to Teenie Harris as “One Shot,” referring to his ability to get the photograph in a single perfect exposure.  This arrangement also allowed Harris to own his photographs instead of the Courier.

Over his career Harris developed a body of work that chronicled celebrities, civil rights leaders, sports heroes and especially the role of African American soldiers during World War II.  During his 40-year career, Harris captured visual images of the 20th-century urban African American experience from the depression era through the civil rights movement. Harris also spent much of his time documenting the dignified lives of the city’s working class.

On June 12, 1998, Charles “Teenie” Harris died in Pittsburgh.  The once-prosperous Hill District declined during his later years and became impoverished over time.  Charles “Teenie” Harris’s photographs, however, stand as a historical record of its social and cultural life. Harris’s archive images can now be found at the Carnegie Museum of Art.