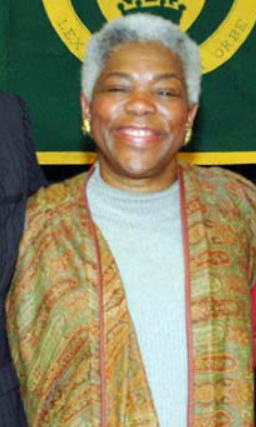 Elaine Jones, the first woman to administer the National Association for the Advancement of Colored People Legal Defense and Education Fund (NAACP-LDF), was born in Norfolk, Virginia on March 2, 1944, the daughter of a railroad porter and a school teacher. She received a Bachelor of Arts degree from Howard University in Washington, D.C. in 1965 and a law degree from the University of Virginia School of Law in 1970, becoming the first African American to graduate from that school.

After graduation Jones turned down a job offer with a Wall Street (New York) law firm to join the NAACP Legal Defense and Education Fund, earning thirty percent less than she had been offered by the other firm. The LDF was founded in 1940 by Jones’s mentor and former Supreme Court Justice Thurgood Marshall to provide legal assistance to the nation’s Civil Rights Movement. It became independent of the NAACP in 1957.

While with the LDF, Jones became the first African American woman to go into the South to defend death- row inmates and on occasion faced Ku Klux Klan members who tried to intimidate her by surrounding courthouses as she tried cases. In 1972, Jones was a member of the legal team that argued Furman v. Georgia, a landmark Supreme Court case which resulted in the abolition of the death penalty, albeit temporarily, in 37 states. During her career as a lawyer with the LDF, Jones has attacked voting rights violations, separate schools and housing, and employment discrimination.

In 1992, Jones was named director-counsel of the LDF, becoming the first woman to head a major civil rights organization. She supervised a staff of almost 100 employees, with a $9 million budget and a docket of more than 300 cases. Under Jones, the LDF continues to work with a variety of civil rights cases, including hate crimes, racial discrimination, equal access to health care and education, and voting rights. During her tenure, LDF lawyers negotiated a landmark settlement in a case against the Shoney’s restaurant chain. The $105 million settlement came after African American employees brought charges of racial discrimination in the hiring and promotion of workers at Shoney’s. The settlement was the highest ever in a case of that kind, at the time.

In 1992 the LDF under Jones served as a liaison between the Los Angeles Police and the black communities in the crisis following the Rodney King beating. In recent years, Jones concentrated on defending the Voting Rights Act of 1965, particularly challenges to reapportioned legislative districts, designed to increase black participation in government. Elaine Jones announced her retirement as head of the NAACP Legal Defense Fund in 2003.