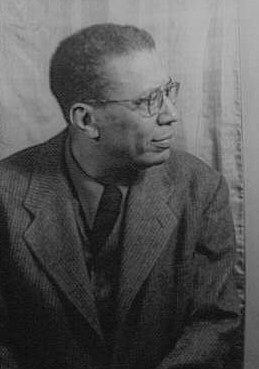 Composer and musician Hall Johnson was born in Athens, Georgia in 1888 to Alice Virginia Sanson Johnson and William Decker Johnson, a bishop in the African Methodist Episcopal Church. His musical talent was apparent from childhood when he studied piano with his older sister, Mary, and taught himself to play violin from a learner’s manual.  His grandmother, Mary Hall Jones, a former slave, had the greatest influence on his later life. She and his mother sang authentic black spirituals that implanted the sound and harmonies of the past culture. Johnson graduated from Knox Institute in 1903 and pursued higher education at several universities before earning a B.A. in music at the University of Pennsylvania in 1910. He later studied at the University of Southern California and the Julliard School.  Johnson married Celeste Corpening in Athens in 1912.

By 1914 the couple had moved to Harlem in New York City. Johnson opened a studio teaching violin and other instruments, as well as playing violin in several groups such as the Negro String Quartet which performed a classical European repertoire and the Southern Syncopated Orchestra, a blues and popular music group. He was also part of the orchestra for Eubie Blake’s Broadway musicals, Shuffle Along and Runnin’ Wild.

Johnson’s greatest contribution was in black choral music.  He formed a choir of eight voices, originally named the Harlem Jubilee Singers, that debuted in New York City in 1926.  By 1928 the expanded twenty member choir, renamed the Hall Johnson Negro Choir, was a celebrated part of the Harlem Renaissance. They gave live and radio performances, appeared at New York’s Town Hall, and received an RCA Victor recording contract.

Johnson gained national attention when he wrote the arrangements, and his choir performed in Marc Connelly’s Green Pastures. In 1933 his own folk opera, Run Little Chillun, enjoyed a four month run on Broadway. Johnson took his choir to California to sing for the film version of Green Pastures. He would remain there until the mid-1940s participating in, or arranging music for, a number of popular motion pictures, such as Banjo on my Knee, Lost Horizon, and Birth of the Blues. In addition, he formed the Festival Choir of Los Angeles.  It was the 1943 picture, Cabin in the Sky, however, that most disappointed him.  In spite of an all-star black cast, MGM did not make a profit from the movie because southern states refused to show the film.

Returning to New York, Johnson formed the Festival Negro Choir of New York that performed his cantata, Son of Man, in 1946.  He published many articles and a collection entitled Thirty Spirituals Arranged for Voice and Piano. Johnson also coached several famous singers such as Marian Anderson, Harry Belafonte, Robert McFerrin, and Shirley Verrett. In 1951 the State Department chose the Hall Johnson Choir to represent the U.S. at the International Festival of Fine Arts in Germany.

Hall Johnson died in New York City in 1970 at the age of 82.  He posthumously received the Handel Award and was inducted into the Black Filmmakers Hall of Fame.