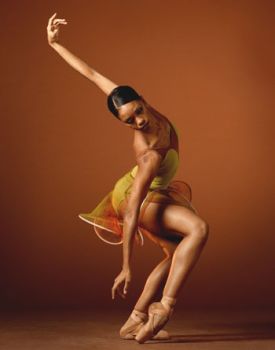 Born in Rochester, New York, on December 30, 1977 to Costello and John Ash, Aesha Ash grew up in a strong, supportive working class family with two brothers, Spencer and Jonathan Ash.  From the age of five Ash took jazz and tap lessons.

At 13 years of age, past the time when most girls begin ballet lessons, Ash was accepted into what is recognized as one of the most prominent classical ballet schools in the world and the official ballet school of the New York City Ballet, the School of American Ballet (SAB).  Ash proved to be such a tremendously gifted dancer that in only a few years, during her last year with SAB, she received the Mae L. Wien Award for Outstanding Promise.  At age 18, Ash became a corps member of City Ballet in New York City. That year in 1996, at the beginning of her professional career, Ash was the only African American woman member of the City Ballet, and for most of the next seven-and-a-half years that she was with the company she remained so.

Ash’s strong and graceful pointe work is in full display in the 2000 movie Center Stage, where she appears as Zoe Saldana’s dance double.

In 2003 Ash left City Ballet to join the famed Béjart Ballet in Lausanne, Switzerland, as soloist.  While enjoying success in Europe with Béjart, Ash nevertheless often felt isolated, and after two years in Switzerland she returned to the United States and joined Alonzo King’s LINES Ballet in San Francisco.  That company was innovative in its use of dancers trained in classical ballet, but employing improvisational and contemporary choreography.  Ash found a revival of her love for dancing with King’s troupe.

Recalling how empowered and encouraged she felt when, as a student at SAB, she would see African American ballerina Andrea Long’s picture on the staircase in the dorms of the school, Ash was inspired to create The Swan Dreams Project.  The project is Ash’s vehicle to try to “change the hearts and minds of the ballet audience” and to introduce the world of classical ballet to inner city youth. Ash especially wants to inspire young women of color to believe in their own strength and beauty, and to show the world that beauty and grace are not defined by race or socio-economic status.

Ash lives with with husband Natale Ruello, an engineer, and their two children.  Although Ash is retired from dancing, in August 2020 it was announced that she would be the first African American full-time faculty member at the New York City School of American Ballet.

Gia Kourlas, “Where Are All the Black Swans?” New York Times, May 6,
2007; http://theblackswandiaries.blogspot.com; Personal Email
Correspondence from Aesha Ash to Olga Bourlin (January 2013).