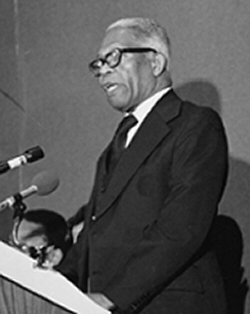 Hulan Edwin Jack was born in 1905 in St. Lucia but migrated with his parents to the United States from British Guiana (now known as Guyana).  The family settled in New York City.

Jack, a high school dropout, eventually went to work for the Peerless Paper Box Company Inc., in New York City. He began as a janitor but eventually rose to become one of the firm’s Vice Presidents.  Jack’s interest in politics, however, emerged early.  He became active in New York City Democratic politics and earned a reputation as a loyal Tammany Hall operative.  Beginning in 1940 Jack won seven elections to the New York State Assembly representing his Harlem district.

In 1953, Jack was elected Borough President of Manhattan, becoming the first African American to hold the post.  Elected more than a decade before the rise of big city black mayors in the 1960s, Hulan Jack was the highest ranking African American municipal official in the nation.  With an annual salary of $25,000 he was also the highest paid black officeholder in the country.

Jack served as Manhattan Borough President for nearly two terms.  His second term was marred by a 1960 Grand Jury indictment for bribery and conspiracy to obstruct justice.  He was also charged with three violations of the New York City Charter.  Hulan Jacks was convicted of the charges and resigned his position as Borough President, effectively ending his political career.

Hulan Jack emerged briefly in 1980 to endorse the candidacy of Lyndon LaRouche for President and to join LaRouche in creating the Committee for a New Africa Policy.  The committee lobbied for short term aid to Africa as well as long term infrastructure development.  Hulan Jack died in New York City in 1986.