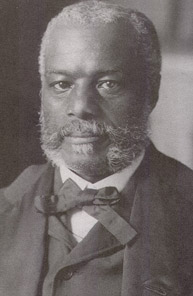 William S. Scarborough was born in 1852 in Macon, Georgia to a free black father and a multiracial mother, who was enslaved.  Scarborough learned to read and write from his white neighbors and a free black family in Macon.  He continued his education in Macon’s Lewis High School and then attended college at Atlanta University before completing his education at Oberlin College in 1875.

In 1877, twenty-five year old Scarborough became a professor of Latin and Greek at Wilberforce University in Xenia, Ohio.  To help his students Scarborough wrote a textbook, First Lessons in Greek.  The book was published in 1881 and eventually became widely used in colleges and universities throughout the nation including Yale University.  Scarborough published a second book, Birds of Aristophanes in 1886.

In the 1880s Scarborough joined two white scholarly organizations, the Modern Language Association (MLA) and the American Philological Association (APA).  Fluent in a number of classical languages, and the author of many published papers on an extensive range of subjects, Scarborough became a world-respected scholar of Greek and Latin literature.

William Scarborough also became, in 1896, the first prominent scholar to challenge Booker T. Washington’s vision for industrial education. He argued, through his influential articles, that blacks, like whites, were capable of succeeding with a liberal arts education.

In 1908 Scarborough was named President of Wilberforce University, a post he held until 1920.  During his tenure as President he continued to write and publish in linguistics and to speak out on race relations.  In 1921 Scarborough was appointed by President Warren G. Harding to a post in the Department of Agriculture which he held until his death in 1926.