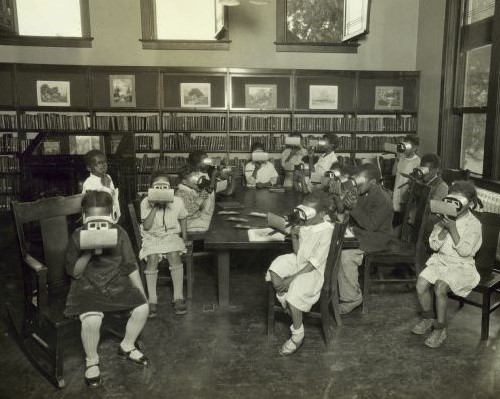 The Cherry Street Library’s story began in 1911, when the Evansville Public Library accepted a $50,000 grant from Andrew Carnegie for two libraries, the West and East branches, both completed in 1912. These libraries did not provide service to African Americans. In late 1912, Chief librarian Ethel Farquhar McCollough convinced the Evansville Public Library’s board of trustees to approach Carnegie about a separate branch library for the city’s African Americans. Carnegie donated $10,000 towards the branch in May 1913.

Local firm Clifford Shopbell & Co. designed the building with a light yellow brick and Belford stone exterior. Its main floor included reading rooms for adults and children and in its basement an auditorium contained seating for eighty. But unlike other segregated public libraries of the period, the Cherry Street Library was not managed by a separate, African American board; it was the domain of the local (white) library board.

Evansville’s population at the time was almost 60,000, only about 6,200 of which were black. But the library’s location on the corner of Cherry and Church streets placed it at the center of Baptist Town, Evansville’s “negro district” at the time. The finished library opened in November 1914.

For over four decades, the Cherry Street Library provided an intellectual center for Evansville’s African-Americans. It loaned nearly 2,000 books in its first month and by 1917 circulation had increased to over 15,000 loans a year. The library was equally successful as a community center, offering literary clubs for adults and children, hosting story hours and gardening contests, and organizing holiday parties and clothing drives for the disadvantaged. Its meeting rooms served countless community organizations and groups including the local branch of the NAACP, the Red Cross, local unions and music clubs; and its auditorium was the stage for many public lectures and musical performances.

Despite its popularity, use of the Cherry Street Library began to decline in the 1940s. By 1952, the year Evansville desegregated its library facilities, much of the city’s African American population had migrated away from Baptist Town and closer to the Lincoln Gardens neighborhood. The Cherry Street library closed in July 1955 and was later sold to a local Boy Scout troop. The building remained an architectural landmark until 1971, when it was razed to make room for an expanding hospital facility.