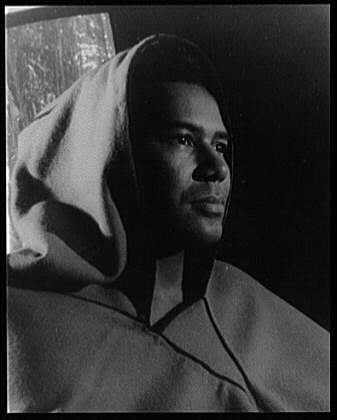 Rex Ingram, one of the first African American male actors to serve on the Board of the Screen Actors Guild, was born in 1895 on a houseboat on the Mississippi River near Cairo Illinois. Ingram claimed to have sailed as a crewman on a windjammer after receiving a medical degree from Northwestern University in Illinois, though little is actually known about his personal life prior to his entry into acting.

Ingram’s film career began in 1918, when he made his acting debut by appearing in bit parts of Tarzan films.  He went on to appear in silent films such as The Ten Commandments (1923). Between filming, Ingram worked as a professional boxer to support himself and later appeared in a number of Broadway plays, including Porgy and Bess and Stevedore. During his Broadway interim in New York, Ingram traveled back and forth to Hollywood where he obtained small parts in a number of movies, including the 1933 film The Emperor Jones opposite Paul Robeson. His big break came when he appeared in the 1936 film Green Pastures, for which he received acclaim for his multifaceted ability to portray the characters De Lawd, Adam, and Hezdrel.

In 1939, Ingram was offered a role in The Adventures of Huckleberry Finn as the character Nigger Jim. Despite its racially stereotypical tone, Ingram accepted the role and by the early 1940s, studios were aggressively pursuing him regularly. Ingram became known for his portrayal of powerful, dignified, dominant characters, in films such as The Thief of Bagdad (1940) where he won critical acclaim for his role of the heroic Genie of the Lamp.  He also appeared in Cabin in the Sky (1943), and A Thousand and One Nights (1948).

While Ingram’s career was on the rise, his personal life suffered. In 1948, he pleaded guilty to having transported a 15-year-old girl out of the state of Kansas for immoral purposes. Consequently, he was sentenced to a short prison term, lost his California home and several scheduled movie roles. However, Ingram managed to successfully resume his film career following the incident and remained in the film and television industry regularly until he died of a heart attack in his Hollywood home in 1969.

Rex Ingram, “I Came Back from the Dead: Actor tells of his
Determination to Return to Stardom after Period of Disaster.” Ebony,
Vol. 10, (March 1955); The New York Times, “Rex Ingram, the Actor, Dies
in Hollywood at 73,” September 20, 1969; Donald Bogle. Blacks in
American Film and Television: An Encyclopedia, (New York: Garland
Publishing, Inc, 1988).