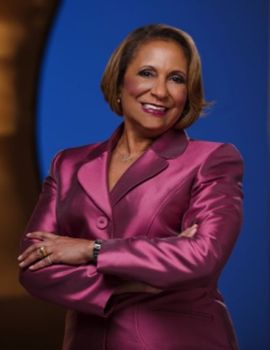 Cathy Hughes is the founder and chairperson of Urban One, Inc., (previously known as Radio One) the largest African-American owned and operated broadcast-company in the nation. In 2011, the corporation owned 53 broadcast stations in 16 urban markets across the United States.  Urban One is the parent corporation of TV One, a partnership with Comcast, and Syndication One.   It is the media home of a number of radio personalities and programs popular in the African-American consumer market including Rev. Al Sharpton, Yolanda Adams, Russ Parr, Rickey Smiley, Lonnie Hunter and CoCo Brother.  Urban One is the parent company of Reach Media, which is the home of the Tom Joyner Morning Show, Music One which hosts Harpist Jeff Majors, and Interactive One, an online network which hosts Black Planet, NewsOne, and Hello Beautiful.   Urban One, Inc, also markets and distributes CD’s and DVD’s. Urban One shares other firsts as well. It is the first African-American company in radio history to dominate several major markets simultaneously.  It is also the first woman-owned radio station to rank #1 in any major market.

Catherine Elizabeth Woods was born in Omaha, Nebraska, on April 22, 1947 to Helen Jones Woods and William Alfred Woods, who was the first African-American to earn an accounting degree at Creighton University. Hughes moved to Washington, D.C. in 1971 and became a lecturer in the newly established School of Communications at Howard University. She entered radio in 1973 as the General Sales Manager at WHUR, the radio station of Howard University.   While there she increased the station’s revenue from $250,000 to $3 million in her first year.

In 1975, Hughes became the first woman vice president and general manager of a station in the nation’s capital and created the format known as the “Quiet Storm,” which revolutionized urban radio and was aired on over 480 stations nationwide. Five years later, she purchased her first station, WOL-AM in Washington, D.C.

After becoming the owner of WOL-AM, Hughes pioneered yet another innovative format—“24 hour Talk from a Black Perspective.” With the theme, “Information is Power,” Hughes served as the station’s morning show host for 11 years. WOL is still the most listened to talk radio station in the nation’s capital.

Urban One is a publicly owned company trading under the stock ticker symbol, UONE. When Radio One became publicly traded in 1999, Hughes earned another first, the first African-American woman to chair a publicly held corporation.

Hughes’ dedication to minority communities, entrepreneurial spirit, and mentoring of women are manifested in every aspect of her work and life. As such, she was honored with the Lifetime Achievement Award from the Washington Area Broadcasters Association and The Seventh Congressional District Humanitarian Award.