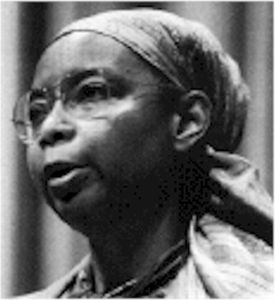 The novelist and poet Gayl Jones was born November 23, 1949 in Lexington, Kentucky.  She came from a creative background; her grandmother Amanda Wilson wrote religious dramas and her mother Lucile wrote fiction.  By the time she was seven years old, she had already begun writing her own fiction.  In high school, Jones was described by her teachers as brilliant, but painfully shy.

Jones attended Connecticut College as an English major, where she received several prizes for her poetry and earned a bachelor’s degree in 1971.  She then pursued a master’s degree in creative writing from Brown University, while studying with William Meredith and Michael Harper and where her first play, Chile Woman, was produced.  In 1973, she successfully completed her master’s degree and continued to study at Brown, where she ultimately earned a Ph.D. in creative writing in 1975.  Jones published her first novel, Corregidora, that same year, and one year later became an assistant professor at the University of Michigan.

Besides such honors and praises, Jones’s work has also received harsh criticism. Many critics write that her work contains excessive graphic violence.  Others contend that her stories lack positive race images.  Jones counters that her concern is not with creating positive images but with representing the world as she sees it.

Gayl Jones currently lives in her hometown of Lexington, Kentucky.