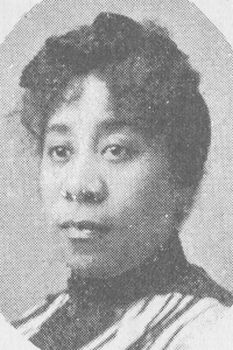 Late 19th and early 20th century African American playwright, novelist, and columnist Pauline Hopkins was born in Portland, Maine in 1859. Hopkins was born to free parents of color who raised her in Maine for a short period before moving to Boston, Massachusetts. Hopkins’s father, Northrop Hopkins, a Civil War veteran and member of the Grand Army of the Republic (GAR), was born in Alexandria, Virginia. Her mother, Sarah A. Hopkins, (formally Allen) was a native of the greater Boston area. Hopkins later adopted her mother’s maiden name as a pen-name for her many published works.

While in Boston, Hopkins attended Girls High School, which was a leading secondary institution in the region and whose graduates entered prestigious colleges and universities across the nation.  While at Girls High School, Hopkins, then 15, entered into an essay competition for African American students that was hosted by William Wells Brown.  At the time, Brown was considered the nation’s premier black novelist.  Hopkins won the competition and the ten-dollar prize for her essay “Evils of Intemperance and Their Remedies.”

At the age of 16, Hopkins began her career as a stage performer debuting with the Progressive Musical Union, a Boston choral group.  Two years later, in 1877, Hopkins was selected to be the lead actress in the stage production of Pauline or The Belle of Saratoga. By 1879 Hopkins and her family created the Hopkins Colored Troubadours, a musical troupe that accompanied her on national tours where she starred in musical dramas including ones she wrote.  Her first original play, Slaves’ Escape or The Underground Railroad (which later became Peculiar Sam), opened in Boston in 1880.  Hopkins was only 21 at the time.

In 1895, Hopkins took on a position of employment as a stenographer in the Bureau of Statistics for the Massachusetts Decennial Census. However, writing remained her passion, and in 1900 she authored her first short piece of published fiction, “The Mystery within Us,” which appeared in Colored American Magazine. By 1902, Hopkins had become the editor of Colored American, and it was during this period that she also authored three novels: Hagar’s Daughter: A Story of Southern Caste Prejudice (1901); Winona: A Tale of Negro Life in the South and Southwest (1902); and Of One Blood, or, the Hidden Self (1903). In 1915, Hopkins became the first black editor of New Era Magazine, one of the leading journals of the period.  The New Era folded in 1918, and Hopkins ended her brief but brilliant literary career.  That year she became a stenographer at the Massachusetts Institute of Technology, a post she held for the rest of her life.

Pauline Elizabeth Hopkins died in August of 1930 from burns received from a fire in her Boston residence. She was 71.