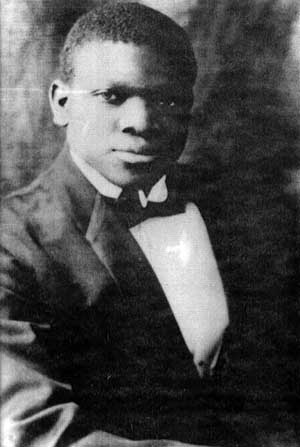 Oscar Holden, often called the patriarch of Seattle jazz, was one of the earliest of Seattle, Washington’s influential jazz musicians. Holden was born in Nashville, Tennessee on April 11, 1886 to parents John Wesley Holden and Ann West Holden.  He was the fourth child of five children.

Beginning in 1890 a number of Nashville African Americans began leaving the south for Cleveland, Ohio, Chicago, Illinois, and Detroit, Michigan among other Midwest cities.   By 1907 Oscar Holden had joined that migration partly because his sister, Sallie Holden Estelle, had married and was living in the city.  Holden’s children recall that he rarely talked about his southern life, except to say he purposely did not marry until he fled Dixie, so his children would not be born there.

Holden arrived in Chicago when the emerging South Side black community was beginning to attract musicians from around the nation.  Over the next decade, nearly 100,000 blacks migrated to Chicago creating an environment that supported dozens of nightclubs.  Holden played in a number of those clubs including Mott’s Pekin Saloon/Theater, the Elmwood Cafe and the Plaza Cafe.  As his skill and reputation as a musician grew, Holden traveled beyond Chicago.  He played on Mississippi riverboats where he met you Louis Armstrong and the two formed a life long friendship.

In 1918 Holden left Chicago and moved to Vancouver, British Columbia. He formed his own 10-piece jazz band and regularly performed at the Patricia Cafe in the city.  Band members included Holden as pianist and clarinet player, Charles Davis on banjo, Albert Paddio on trombone, Frank Odel on saxophone and Williams Hoy as drummer and xylophonist.  Visiting musicians who performed with Holden at the Patricia Cafe included Ferdinand “Jelly Roll” Morton and Ada “Bricktop” Smith.

During the Great Depression Holden continued to play in clubs and halls that flourished on Jackson Street.  In World War II both Oscar and Leala before her death, worked at the Todd Shipyard while Oscar continued to perform at night. In 1942 they purchased a home across the street from Washington Hall, a well-known jazz venue which was one of the first places to welcome black performers.

Holden had great endurance and in between his day shifts at Todd Shipyards in Seattle and night shifts playing at clubs, he would regularly swim two miles across Lake Washington. He continued performing until he suffered a stroke in 1966. Oscar Holden died three years later in Seattle in 1969 at the age of 83.