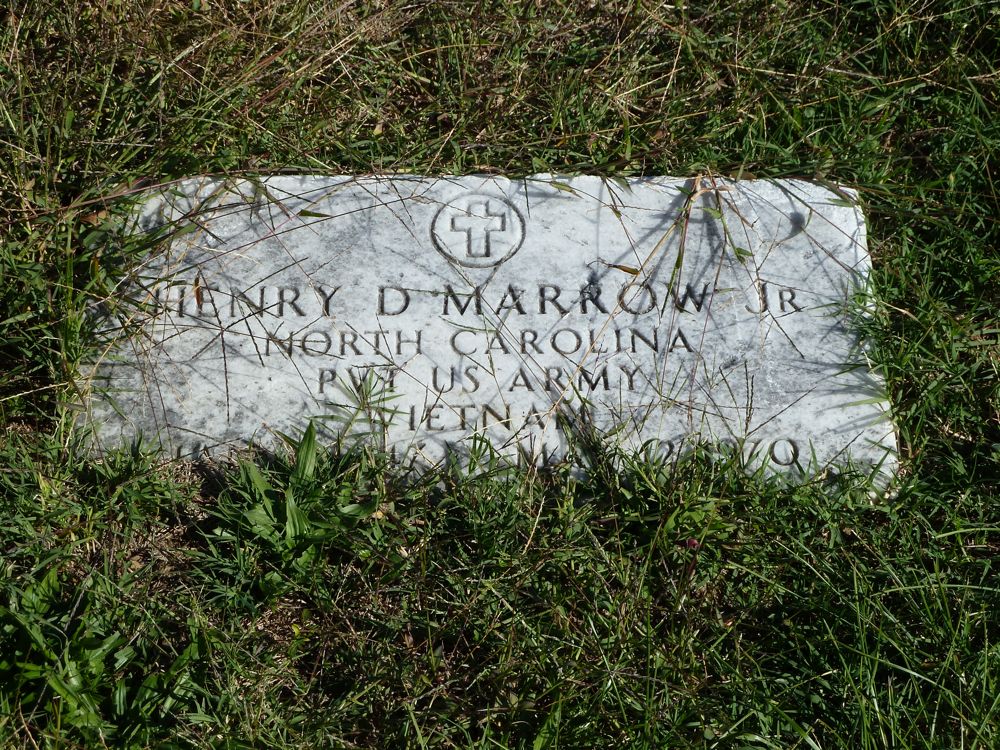 Henry Dortress “Dickie” Marrow was an African American veteran who was shot and killed after a racial confrontation with whites in Oxford, North Carolina, on May 12, 1970.  The confrontation and murder seemed to have many parallels to the far more famous Emmitt Till case in Mississippi in 1955.

Marrow was born on January 7, 1947, to Henry D. Marrow and Ivey Hunt Marrow. Marrow’s parents separated when he was young. During his childhood, his mother moved to New Jersey to work, leaving him to live with his grandparents in Oxford, North Carolina. During his adolescence, he moved in with the family of future civil rights activist and minister Benjamin Chavis Jr. Marrow attended Mary Potter High School in Oxford, North Carolina.

After graduating from Mary Potter High School, Marrow briefly attended Kittrell College for a year and then dropped out. Marrow then joined the U.S. Army and was stationed in Fort Bragg, North Carolina. Marrow did not like army life and was reluctant to fight in the Vietnam War, but he was never sent overseas.

After completing his military service, Marrow returned to Oxford, North Carolina and found a job working at Umstead Hospital in Butner, North Carolina. By that point, Marrow was married, and he and his wife, Willie May Sidney, had two daughters together.

On May 11, 1970, Marrow and a couple of his friends were playing whist, a classic English trick-taking card game at Tidewater Seafood Market. Just before 9 pm, Marrow left the market, telling his friends he planned to visit Teel’s Grocery Store, a white-owned store, to buy Fanny Chavis, a Coca-Cola. Teel’s 18-year-old son, Larry and Larry’s wife Judy were unpacking motorcycles in the parking lot.

What occurred next is often disputed; Marrow was accused of saying ugly remarks to Larry’s wife, Judy. In response, Larry shouted at Marrow. Larry’s brother, Robert Teel and his stepson Roger Oakely ran into the shop and retrieved their guns. Marrow told Larry he was talking to two African American women nearby and denied saying anything to Judy Teel. Larry Teel then tried to hit Marrow with a wooden block, and Marrow drew a knife. According to some eyewitnesses, Marrow attempted to flee when Oakely and Robert Teel emerged from the Teel store carrying two shotguns and a rifle. Robert Teel fired his shotgun, hitting Marrow and wounding his friend, Boo Chavis. Robert Teel fired again and hit Marrow. Oakley then shot Marrow twice with the shotgun. Marrow was still conscious when Oakley, Robert, and Larry Teel approached him and started to beat him, calling him racial slurs. One of the Teel brothers then shot Marrow in the head with his rifle. Marrow later died on his way to Duke University Medical Center.

Following Marrow’s funeral, mourners marched to the confederate monument at the county courthouse in downtown Oxford, where leaders spoke about Marrow’s killing. Protests continued continue, and arson was committed on several white-owned buildings in Oxford, North Carolina. A curfew was established in the city because of the civil unrest.

Robert and Larry Teel, and Robert Oakley were all indicted on charges of murder. The three were founded not guilty of all charges by an all-white jury. Marrow’s widow then filed a wrongful death civil suit against Teels. After the murder trial, Benjamin Chavis led a protest march from Oxford to the state capitol building in Raleigh. Chavis also conducted a boycott of white-owned businesses that lasted for 18 months, ending the segregation of public facilities. Author Timothy Tyson wrote a book called Blood Done Sign My Name (2004) based on the events. In 2010, a film about the episode called Blood Done Sign My Name, was released.