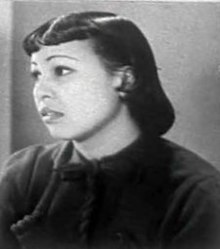 Actress Edna Mae Harris made a name for herself as a lead in underground films of the 1930s and 1940s, which depicted the life of the black bourgeoisie. Harris was born in Harlem, New York, in 1914 to Sam and Mary Harris. Her father was a boxer and customs inspector and her mother worked as a maid for gay 90s pin-up Lillian Russell.

Harris’ family was among the first African American families to migrate to Harlem. They settled near the Lafayette Theater. After the relocation, Harris was encouraged to pursue a career in show business by performers Ethel Waters and Maud Russell who frequently dined at the Harris household. Waters and Russell routinely practiced their acts and coached Harris on perfecting her singing and dancing skills. Harris went on to perform on the Theater Owners Booking Association (TOBA), a vaudeville circuit for African American performers during the 1920s and 1930s.

In the early 1930s, Harris left Harlem to pursue a career in Hollywood and in 1936, made her first film appearance in The Green Pastures as the feisty character Zeba. The Green Pastures was one of the few films produced by a major Hollywood studio in which Harris appeared. Although she maintained a film career during the late 1930s to mid-1940s, her efforts to appear in Hollywood films were futile. After a few additional insignificant roles in Hollywood films, Harris returned to New York and appeared primarily in underground, all-black cast films, such as the Spirit of Youth (1938) as Joe Louis’ love interest, and Lying Lips (1939).

Underground films such as Paradise in Harlem (1940) and Murder on Lenox Avenue (1941) allowed her to showcase her abilities as a nightclub performer. By the late 1940s when the making of all-black cast underground films began to decline, Harris’ film appearances became sporadic. Between filming minor roles, she worked as a dancer at New York’s historical Cotton Club where she performed with her partner, Slim Thomas. Harris was also a vocalist with the Noble Sissle orchestra and Benny Carter band. Edna Harris died in New York in 1997 at the age of 83.