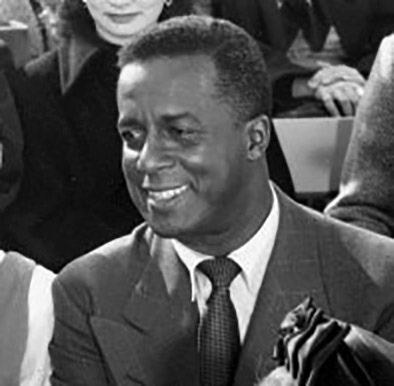 Joel Fluellen, an instrumental figure in the fight to end Hollywood bias during the 1940’s and 1950’s, was born in 1908 in Louisiana. Prior to beginning his acting career, Fluellen resided in Chicago where he worked as a milliner and store clerk.  After appearing on stage in New York, he relocated to Hollywood in the early 1940’s and gained his first role as a bit player in Cabin in the Sky (1943).

Realizing that acting opportunities were scarce for African Americans, Fluellen became a member of the Screen Actors Guild (SAG) and submitted numerous resolutions urging the union to “use all its power to oppose discrimination against Negroes in the motion picture industry.” After SAG ignored his concerns, Fluellen became one of the founding members the Negro Actors Guild to help provide better opportunities on the West Coast. He also organized the Negro Arts Theater in Los Angeles.

Although his involvement in the SAG led to gradual changes for African American actors, more than twenty years passed before the guild formed the Ethnic Equal Opportunity Committee to help improve film roles for the race. Fluellen continued to work as a film extra but his roles became no more substantial in mainstream films. He did, however, gain notable exposure in all-black films such as The Jackie Robinson Story (1950) in which he portrayed Jackie’s college-educated, Olympic-winning brother; A Raisin in the Sun (1961) as Walter Lee’s potential business partner; and the Great White Hope (1970) as Jack Jefferson’s coach.

When Fluellen’s film career ended in the late 1970’s, he continued to promote racial equality in Hollywood. In 1984, his supportive efforts for the advancement of African Americans in film led to a star on the Hollywood Walk of Fame for the late Dorothy Dandridge. The following year, he received the first Paul Robeson Pioneer Award from the Black American Cinema Society.

During the last years of his life, Fluellen suffered from prolonged illness and blindness. He died of a self-inflicted gunshot on February, 6, 1990.