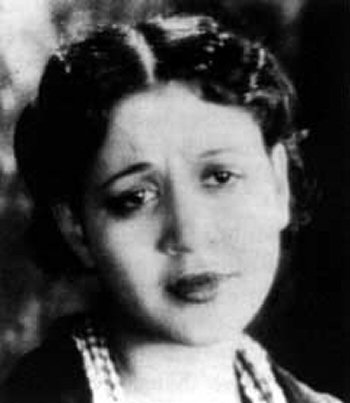 Lauded for her masterful performance in her only film, Lucia Lynn Moses began her show business career as a chorus girl at New York’s legendary Cotton Club in the early 1920s and went on to perform in the theater. She made her film debut when David Starkman, the Caucasian owner and founder of the Philadelphia-based Colored Player’s Film Corporation (a largely white-owned and operated company that initially had a predominately white clientele but chose to cater to the growing population of African American theater goers rather than relocate) teamed up with black vaudevillian Sherman Dudley to recruit a group of black actors to appear in the company’s silent race films. Because Oscar Micheaux, leader of race films, was also producing all-black cast, silent films with themes examining intra-racial conflict, The Scar of Shame is widely mistaken as being a Micheaux film.

Lucia Lynn Moses was the daughter of Minister W.H. Moses of the New York National Baptist Church. Against her father’s wishes, Lucia and her two sisters Ethel (later a leading lady and sex symbol in Micheaux’s films) and Julia (later a Broadway performer), pursued show business careers and became part of the Cotton Club Girls lineup.

In 1924, Moses was cast in Dixie to Broadway and later toured globally with Broadway performer Florence Mills. After being spotted during a performance, Moses was approached to work for the Colored Player’s Film Corporation. She signed on as a contract player with the group and immediately received her role as the leading character, Louise, in the 1927 film The Scar of Shame. Still under obligation to perform at the Cotton Club, Moses commuted to Philadelphia during the day to shoot the film and maintained her job as a chorus girl during the night.

In the film, Moses portrays a vulnerable and emotionally scarred working class woman who commits suicide after her husband, a wealthy concert pianist (portrayed by Harry Henderson), abandons her for a woman of a similar social background. The film is the earliest depiction of class conflict within the African American community.  Moses received rave reviews for her ability to help define a rare depiction of African American prejudices and class tensions.

Lucia Moses’  ambitions as a screen actress where never fully realized because The Colored Player’s Film Corporation collapsed after filming The Scar of Shame due to technical and financial demands. Moses subsequently returned to the stage and appeared in the Broadway revival of Show Boat (1932).  She returned to New York in the 1930s and married Manhattan pianist George Rickson. The couple settled in Jamaica, Long Island.