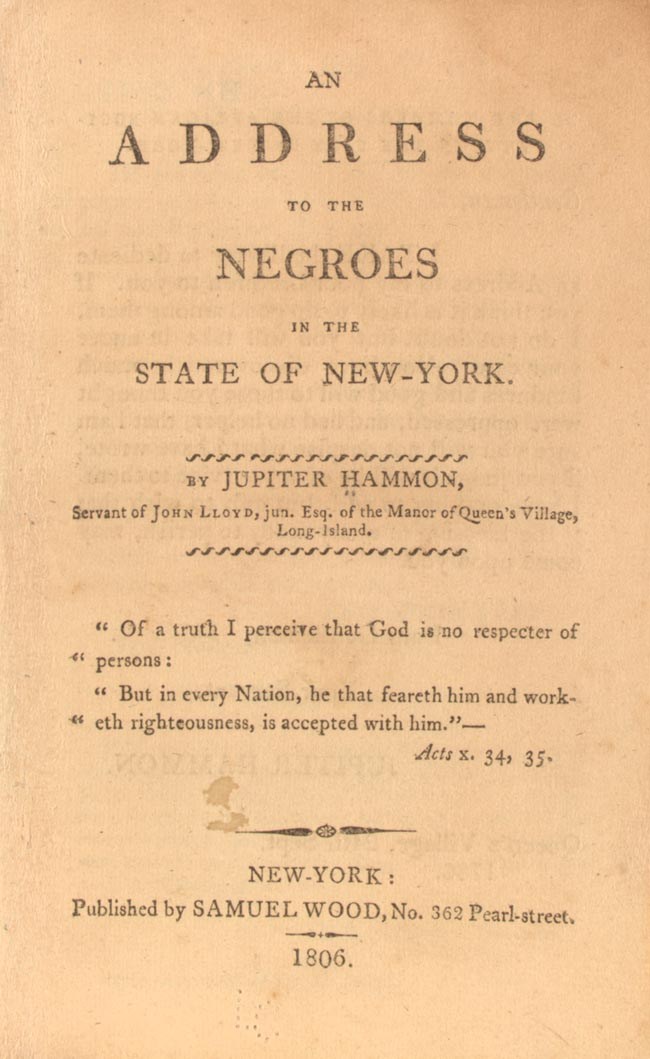 Poet and essayist Jupiter Hammon published his writing while living and working as a slave in Revolutionary-era New England. He is believed to be the first published male African American poet. His essays were directed to slave readers and featured themes of morality and Christian salvation. Later in life he explained that he wrote as a “father and friend” of the slave community, offering a sense of spirituality in lives filled with fear and uncertainty.

Hammon was born in Queen’s Village on Long Island, New York to slave parents owned by Henry Lloyd.  Accounts indicate that Hammon had moderate amounts of freedom while serving as a slave through his work as a clerk for Lloyd’s merchant company. When Henry Lloyd died in 1763, ownership of Hammon was transferred to Henry’s son, Joseph, who was active as a Patriot in the Revolutionary War and who died during the war. Hammon’s ownership then was passed on to John Lloyd, Jr.

Hammon’s early work was in poetry, beginning in 1760 with Evening Thought, Salvation by Christ, with Penitential Cries. His first essay, Winter Piece, was published in 1782. Hammon’s writing encouraged his slave readers to “cheerfully perform the duties of the day,” and he often proselytized that submission to God would lead to salvation, and eventual freedom. In 1784 he was the featured speaker at the first recorded meeting of the African Society of New York City. His speech to the group led to the philosophy that enslaved blacks needed to prove their value and could earn their freedom by being obedient and by living moral lives. He was criticized by activists of the day for disregarding black autonomy.

While his previous work had been directed toward the slave community, his last essay, Address to the Negroes of New-York published in 1787 by the African Society of New York City, was directed to free and enslaved African Americans. In it he pondered the price African Americans paid during the Revolutionary War, fighting for freedom that was not yet theirs.

There is no record of Hammon’s death, although it is known that he lived his entire life as a slave, eventually in servitude to John Nelson Lloyd, a great-grandson of his original owner, Henry. It is believed that Hammon is buried on the Lloyd property in an unmarked grave.