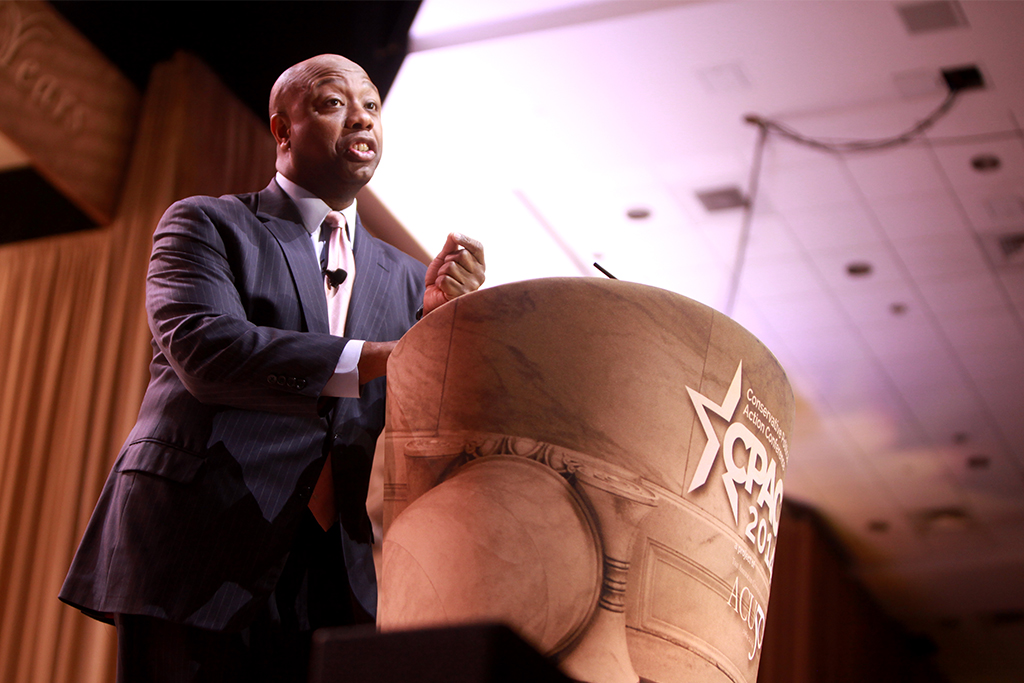 Before his appointment to the Senate post on December 17, 2012, Scott was a Congressman representing South Carolina’s 1st Congressional District.  Elected during the 2010 midterm elections, he was also the first black Republican elected to the House of Representatives from South Carolina since George Washington Murray, who served in Congress from 1896 to 1897.

Senator Scott was born on September 19, 1965, in North Charleston and grew up in this impoverished neighborhood.  His parents divorced when he was seven.  In order to make ends meet, his mother, Frances, worked sixteen-hour days as a nurse’s assistant, a profession which she still holds.  Scott’s older brother is a U.S. Army officer, stationed in Germany.

Tim Scott graduated from Charleston Southern University with a B.S. in political science in 1988.  He began his professional life selling insurance door-to-door.  Over the years, the business, Tim Scott Allstate Insurance, developed into a highly successful company.  Scott is also a partner in the Pathway Real Estate Group.

In 1995, Scott was elected to the Charleston County Council, becoming the first black Republican to hold a countywide elected office since Reconstruction.  He served on the council for thirteen years, rising to the position of council chair in 2008.

In 2010, Scott won the vacated seat of Republican Congressman Henry Brown, Jr. When Scott decided to enter the race for Congress, he raised $725,000, far more than the $20,000 of his closest challenger. He subsequently won a resounding victory in the nine-candidate Republican primary.  Among his opponents was Carroll Campbell III, the son of the late governor.  In the ensuing Republican runoff election, Scott also won out over Paul Thurmond, son of the late Senator Strom Thurmond.  A tireless campaigner, Scott, a conservative, received endorsements from former Alaska Governor Sarah Palin and the Tea Party.  In the general election, he defeated the Democratic challenger, Ben Fraser, by more than a two to one margin.

The freshman representative was appointed to the House of Representatives Small Business and Transportation Committees. Having defined himself as a fiscal and social conservative, he declined to join the Congressional Black Caucus which he considers a liberal organization.

Scott supports repeal of all pro-choice laws and opposes both same-sex marriage and stem cell research. He also endorses anti-immigration legislation, similar to the bill signed into law by Arizona Governor Jan Brewer in April 2010. He favors legislation that would penalize employers who knowingly hire illegal aliens.  He supports legislation that would make English the official language of the United States.  The South Carolina congressman also supports repeal of President Barack Obama’s Patient Protection and Affordable Care Act, favoring a free market in health care.

On December 17, 2012, Scott was appointed by South Carolina Governor Nikki Haley to be the state’s junior Senator, completing the unexpired term of Senator James DeMint who resigned his seat.  Scott won relection to the final two years of DeMint’s term in 2014.  He was re-elected to a full term as U.S. Senator in November 2016.