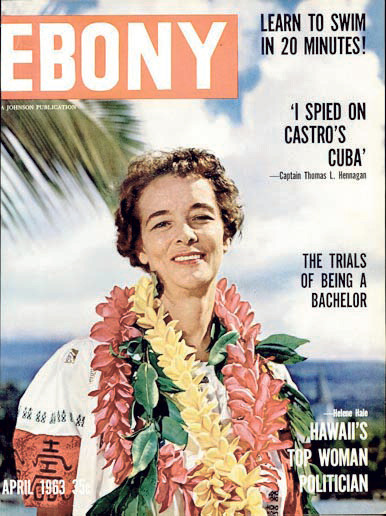 Helene Hale on cover of Ebony, April 1963
Fair use image

Helene (Hilyer) Hale, the first African American woman elected to the Hawaii Legislature, was born March 23, 1918 in Minneapolis, Minnesota.  Her father was an attorney in Minneapolis and her grandfather was one of the first African American attorneys to graduate from the University of Minnesota. Her uncle, Ralph Bunche, was the first African American to receive a Nobel Peace Prize. Over the course of her life, Hale was a teacher, realtor, and politician. Helene Hilyer married William Hale, a teacher from Nashville, Tennessee.  The Hales were teaching in California in 1947 when she heard a presentation by poet Don Blanding about the pleasures of living in a small Hawaiian town called Kona.  The Hales decided they would move to Kona and raise a family in a multicultural society.

When the Hales moved to Kona, Hawaii, the Japanese, Hawaiian, and Caucasian communities had little social interaction.  Since Helene and William Hale were African American, they easily associated with all of Kona’s diverse communities which facilitated her later entry into local politics. Helene Hale taught in the public schools and opened the Menehune Book Store in Kona.  Shortly afterwards she became active in politics as a Democrat.

In 1954 Helene Hale ran for public office as a County Supervisor.  She won her election and became the first woman to hold a government office in Hawaii since Queen Lili’uokalani. She represented the west side of Hawaii County for eight years.  In 1962 she was elected Chairman and Executive Officer of Hawaii County, a position equivalent to “mayor” of the County.  With that election she became the first woman and the first African American mayor in Hawaii.  Her election won national attention and she was on the cover of Ebony magazine in 1963. One of her significant achievements during her term in office was the establishment of the annual Merrie Monarch Festival in honor of King Kalakaua, an event celebrating traditional Hawaiian culture and hula.

Hale lost her mayoral election in 1965 but continued to be active in politics. In 1967, the Hales were divorced. She married Richard Kiyota in 1978.  In 1980 she was reelected to the Hawaii County Council and served one two-year terms.  She returned to Council again in 1992.  In 2000, she successfully ran for State Representative with the slogan “Recycle Helene Hale.”  Her victory made her the first African American woman to serve in the Hawaii State Legislature.  At 82 she was also the oldest person ever elected.  In the State House, Hale supported civil rights legislation, and, in 2002, she introduced a resolution urging the United States not to go to war in Iraq.  In 2008 Helene Hale was presented the Hawaii NAACP’s Lifetime Achievement Award.

Helene Hale died on February 1, 2013 at the age of 94 in Hilo, Hawaii.  Flags were flown at half-mast in her honor.  She is considered the “grand dame of Hawaii politics.”  The University of Hawaii Hilo offers a scholarship in her honor and her collection of books was donated to the Helene Hale Women’s Center located at the Hilo Public Library.