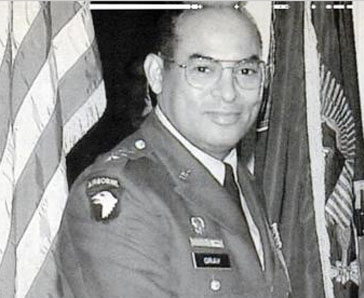 Lieutenant General Robert Earl Gray was the first African American to become the Commanding General of the United States Army Signal Corps and the first African American Commander of Fort Gordon, Georgia, which conducts advanced training for military occupational specialties. The United States Army Signal Corps (USASC) was established in 1860 and it is responsible for providing and managing communications and information systems which support the workings of the US armed forces.

Robert Earl Gray was born on October 18, 1941, in Algoma, West Virginia. He graduated from Elkhorn High School in Algoma in 1959 and then attended Ohio State University. He graduated with a bachelor’s degree in Computer and Information Science. Gray’s career in the military began in 1961 when he enlisted as a private in the US Army, a position which he kept until 1966 when he received his commission as a second lieutenant. From there his military career led him to command units in Europe, South Vietnam, and to multiple positions with the Defense Intelligence Agency in Washington, D.C. until 1976. Beginning in 1977, Gray returned to work at Fort Bragg, North Carolina in various roles until 1990, including becoming the first African American Commander of the 35th Signal Brigade, XVIII Airborne Corps from November, 1988 to May, 1990. On April 1, 1990, Gray was promoted to the rank of Brigadier General and he continued rising through the military’s ranks to become a Major General on November 18, 1991.

In August of 1991, General Gray became the first African American Commanding General of the United States Army Signal Center and Commandant of the United States Army Signal School. Gray’s presence as Chief of Signal served to diversify the leadership at Fort Gordon, Georgia. During his tenure there, which lasted until July, 1994, Gray oversaw the expansion of the Fort as three units were relocated there during the Gulf War. He was also involved in spearheading a large reorganization of the Signal School which trained soldiers in new techniques for the Army as it became increasingly based on digital technology. These accomplishments among others led Gray to being promoted to Lieutenant General on May 25, 1995.

Gray eventually retired from military service in 1997, after more than thirty-two years in the US Army.  He received the Legion of Merit and the Bronze Star Medal among other recognitions. During his retirement, Gray remained involved in his community, volunteering and serving as the chairman of the Columbia County Democratic Party. Gray was also married, and with his wife Annie, he had three children: Frances, Edith, and Parker.

Lieutenant General Gray died as a result of injuries sustained in a car accident on November 23, 2011 at the age of 70. According to the Georgia State Patrol, Grey was driving on Georgia Highway 21 around 6:30 a.m. near Millen, Georgia when he ran a stop sign and his pickup truck collided with an 18-wheel tractor trailer. Gray was buried at Arlington National Cemetery and is survived by his wife, mother, three siblings, his three children and seven grandchildren.