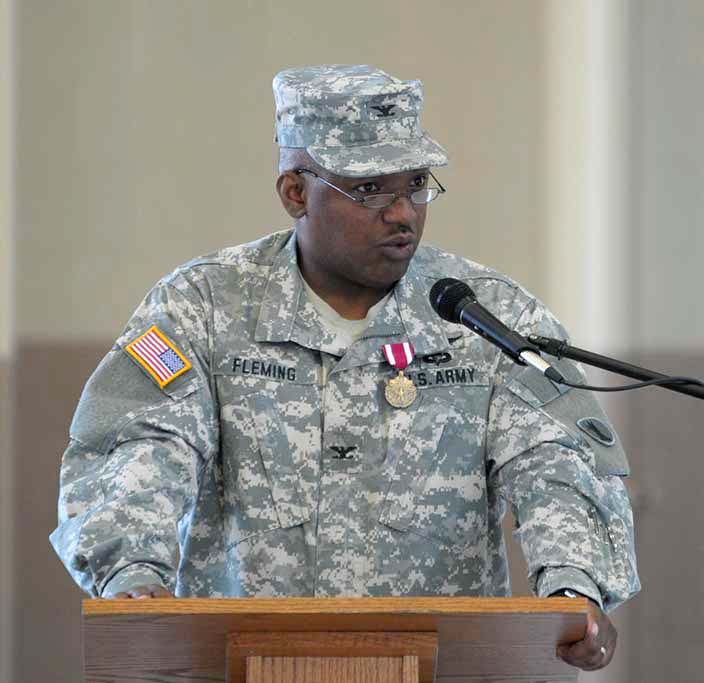 David Fleming III is a brigadier general in the United States Army, who in 2017 became the first African American to be promoted to the rank of general in the Delaware National Guard.

Fleming was born in 1962 to David and Huggie Fleming in New Jersey. He joined the New Jersey National Guard in 1982, and was commissioned as a second lieutenant through the Reserve Officers Training Corps (ROTC) program at the University of Pennsylvania in 1986. After attending flight school to become a helicopter pilot, he was posted with the Delaware National Guard’s 150th Aviation Battalion in New Castle, Delaware, serving as a platoon leader and instructor. Fleming graduated from Glassboro State College in New Jersey in 1990 with a criminal justice degree.

In August 1998, Fleming was promoted to the rank of major and became commander of the 198th Medical Company, Delaware National Guard. That same year, he received a Master of Science in criminal justice degree from Saint Joseph’s University. In 2000, Fleming began three years of service with the 72nd Troop Command in Wilmington, Delaware.

Fleming became a lieutenant colonel in 2003 and moved to the National Guard’s headquarters in Wilmington. There, he served two years each as the state’s Aviation Safety Officer and Ground Safety Officer until 2007 when he became Chief of the Aviation Branch. Fleming remained in this position for four years. In 2011, Fleming put in two years as the commander of the 722nd Aviation Battalion before returning to his previous post.

Fleming’s second stint as chief was short-lived, however, as in December of 2013, he was promoted to colonel and made commander of the 72nd Troop Command. His career reached its highest point in 2016, when he was named Assistant Adjutant General, Army, putting him second in command of the Delaware Army National Guard and its 16,000 troops.

On July 31, 2017, Fleming was promoted to brigadier general, making him the first African American general in the history of the Delaware National Guard. He was officially decorated on October 20th at a ceremony in New Castle. He continues to serve in this capacity, as part of a military career that spans more than thirty years and over a dozen decorations.

Fleming has flown more than 2,100 hours in the UH-1H and UH-60 helicopters. In 2010, he earned a master’s degree in strategic studies from the U.S. Army War College. In addition to his military career, Fleming retired in 2013 after serving 25 years as a police officer and rising to the rank of Lieutenant and Narcotics Task Force Commander for the Atlantic County Prosecutor’s office in Mays Landing, New Jersey. He lives there with his wife, Andrea, and their nine children.