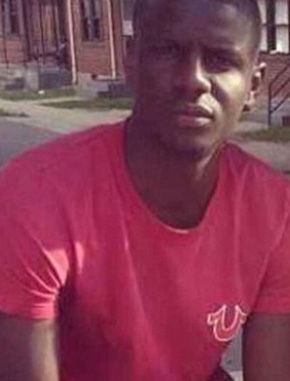 The death of Freddie Gray in 2015 while in police custody brought increased attention to the national debate on interactions between law enforcement and African Americans and inspired the ongoing Black Lives Matter movement. Freddie Gray Jr. was born on August 16, 1989, in Baltimore, Maryland, to Gloria Darden and Freddie Gray Sr. Along with his older sister, Carolina and twin sister Fredericka, Gray grew up in poverty with their mother. During his childhood, the family moved frequently. Darden battled drug abuse, and Gray, diagnosed with attention-deficit hyperactivity disorder, struggled in school. A 2008 lawsuit filed against the landlord of a home the family lived in during the 1990s found damaging levels of lead from paint in all three Gray children. The suit, settled in 2010 before going to trial, alleged the lead caused Freddie Gray multiple medical, behavioral, and educational problems. As an adult, Gray had multiple run-ins with the law and served time in prison for destruction of property, assault, and drug offenses.

On the morning of April 12, 2015, Baltimore Police officers on bike patrol made eye contact with Gray who then ran away. Gray surrendered a short time later and was restrained by the officers on his stomach until a police van arrived. Arrested for illegal possession of a switchblade, a shackled Gray was placed in a Baltimore Police van but not secured with a seatbelt, against department policy. When the van arrived at the Western District police station roughly forty minutes later, Gray was unresponsive and not breathing. He was transferred to the University of Maryland’s Shock Trauma Center where he lay in a coma for a week with a severe spinal cord injury. Twenty-five-year-old Freddie Gray Jr. died on April 19, 2015.

Immediately, demonstrations in Baltimore demanded police accountability. Following Gray’s funeral on April 27, the initially non-violent protests began to turn into riots as cars and buildings were burned, businesses were looted, schools were closed, and a mandatory curfew was imposed by Mayor Stephanie Rawlings-Blake. Major League Baseball’s Baltimore Orioles were forced to cancel one game and play another in an empty stadium. All told, fifteen structural fires and 144 vehicle fires were reported, some twenty police officers were injured, and more than two hundred arrests made. The governor of Maryland, Larry Hogan, declared a state of emergency and activated the National Guard.

Following the medical examiner’s report that ruled Gray’s death a homicide, state’s attorney for Baltimore Marilyn Mosby on May 1 issued six indictments to officers—Caesar Goodson, Garrett Miller, Edward Nero, and William Porter, Lt. Brian Rice, and Sgt. Alicia White—on charges, including false imprisonment, assault, and manslaughter. Rice, Miller, and Nero were white, and Porter, White, and Goodson, the driver of the police van, were black. In December 2015, Porter received a mistrial, and between May 23, and July 18, 2016, Nero, Goodson, and Rice were acquitted of all charges by Baltimore Circuit Court Judge Barry Williams. On July 27, prosecutors dropped all charges on all of the remaining officers in the Freddie Gray case.