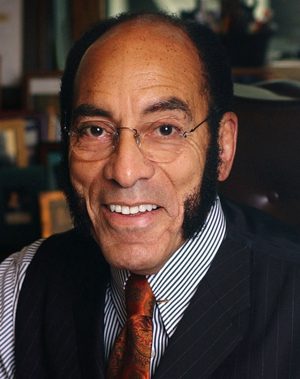 Earl G. Graves, the founder of Black Enterprise, a nationally recognized black business magazine, was born on January 9, 1935, in Brooklyn, New York. Both his mother, Winifred Sealy, and his father, Earl Godwyn Graves, influenced their son’s successful career. His mother led many community activities, and his father was the assistant manager of the Overland Garment Company, an apparel firm in New York City.

Graves entered Morgan State University in 1953, where he majored in economics. Despite the ridicule he received from other students for aspiring to work in the corporate world—which was almost unheard of at that time—Graves responded by becoming an entrepreneur, selling flowers on campus because white florists were unwilling to make deliveries there.

Graves graduated from Morgan State University in 1957 and joined the U.S. Army, where he attained the rank of captain. He married Barbra Eliza Kydd in 1960. After leaving the military, he became a real estate agent in Brooklyn, New York. Eventually, he became politically active, volunteering for the Democratic National Convention during the 1964 presidential campaign. This volunteer position led to a three-year job as one of New York Senator Robert F. Kennedy’s administrative assistants. Here he learned useful political and social skills that advanced his career.

After Kennedy’s assassination in 1968, Graves worked for the Small Business Administration (SBA) and established Earl G. Graves Associates, a consulting firm that advised corporations on urban affairs and economic development. During this time, he had the idea of publishing a newsletter on black business people. The newsletter idea soon expanded to a full magazine, Black Enterprise, which published its first issue in August 1970.  The monthly magazine focused on the importance of black consumer power and black business.

Black Enterprise initially had a small audience. Only three of the roughly three thousand senior executives at major corporations were black. By the tenth issue, however, the magazine became profitable by attracting corporate advertisers and focusing on black business-related stories that other major news sources often ignored.

Graves continued his entrepreneurial ventures and bought the Pepsi-Cola of Washington, D.C. bottling franchise in 1990. In 1998, he sold the company back to its parent company but continued to work as the chairman of Pepsi’s Advisory and Ethnic Marketing Committee. He also sponsored the Greenwich Street Corporate growth fund, which supports mid-sized black owned businesses.

In 1997, Graves published How to Succeed in Business without Being White–part career guide and part autobiography–a book that made both the Wall Street Journal and New York Times best seller lists. Graves was on the board of directors of numerous corporations and non-profit institutions, such as the Schomburg Center for Research in Black Culture and the Steadman Hawkins Sports Medicine Foundation. He received more than four dozen awards and honors including a NAACP Spingarn Medal. In 2002, President George W. Bush appointed him to the Presidential Commission charged with establishing the National Museum of African American History and Culture. In 2002, Fortune Magazine also named Graves one of fifty most powerful and influential African Americans in corporate America. In 2015, Graves’ alma mater, Morgan State University, opened the Earl G. Graves School of Business and Management.

Graves was a member of Omega Psi Phi and Sigma Pi Phi fraternities. He had three sons who worked alongside their father in Black Enterprise. His oldest son, Earl “Butch” Graves Jr. was named the company’s chief executive officer in January 2006.

Earl Graves Sr. passed away on April 6, 2020, following a long battle with Alzheimers disease. He was 85 years old.