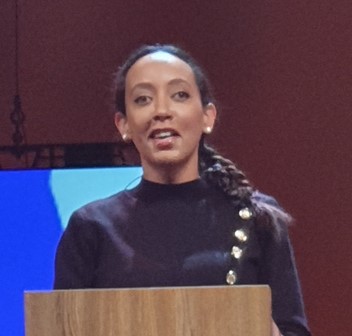 Haben Girma, both blind and deaf, is a disability rights advocate and attorney who became the first deaf and blind graduate of Harvard Law School in Massachusetts when she graduated with a Juris Doctor degree (JD) in 2013.

Girma was born on July 29, 1988, in Oakland, California to her mother, Saba Gebreyesus, who was a refugee from Eritrea.  Gebreyesus fled the country in 1983 during the Eritrea War of Independence against Ethiopia. Girma’s mother and father, an Ethiopian whose name is unknown, met when both lived in Oakland.  Girma was educated in the Oakland Public Schools where she benefited from the Americans with Disabilities Act of 1990, a civil rights law that outlawed discrimination based on disability. Girma learned braille while in school using a digital technology device that helped her read and absorb information faster than with the previous generations of Braille readers. When Girma was 15 years old and despite her blindness and deafness, she got the opportunity to travel to the West African nation of Mali to do volunteer work, helping to build schools with BuildOn, an Oakland nonprofit organization which ran youth service afterschool programs.  The nonprofit also helped build schools in developing countries.

In 2013, Girma joined Disability Rights Advocates (DRA) in Berkeley, California where she specifically performed legal work for people with disabilities. She also worked with the National Federation of the Blind (NFB) and in 2014 she represented Heidi Viens, a blind Vermont mother in a lawsuit against Scribd, a digital library which provides e-book and auto-book subscription services for the blind.  Scribd allegedly failed to give blind readers access to online services, a clear violation of the Americans with Disabilities Act.  A settlement was reached in which Scribd agreed to change its practices.

Girma was appointed to the national board of trustees for the Helen Keller Service for the Blind in January 2015.  Later that year, on July 20, she attended the White House ceremony sponsored by President Barack Obama to commemorate the twenty-fifth anniversary of the Americans with Disabilities Act.

In April 2016, Girma left Disability Rights Advocates to take up non-litigation advocacy full-time. Here she was involved in education-based programs which provided accessibility training, civil rights workshops, and diversity consulting to organizations that worked with the disabled. That same year, Girma gave a speech on accessible design at the Apple Worldwide Developers Conference in San Jose.  She called on developers to remember those with disabilities when they designed the next generation of computers and software. Girma’s personal hobbies include surfing, rock climbing, kayaking, cycling, and dancing.